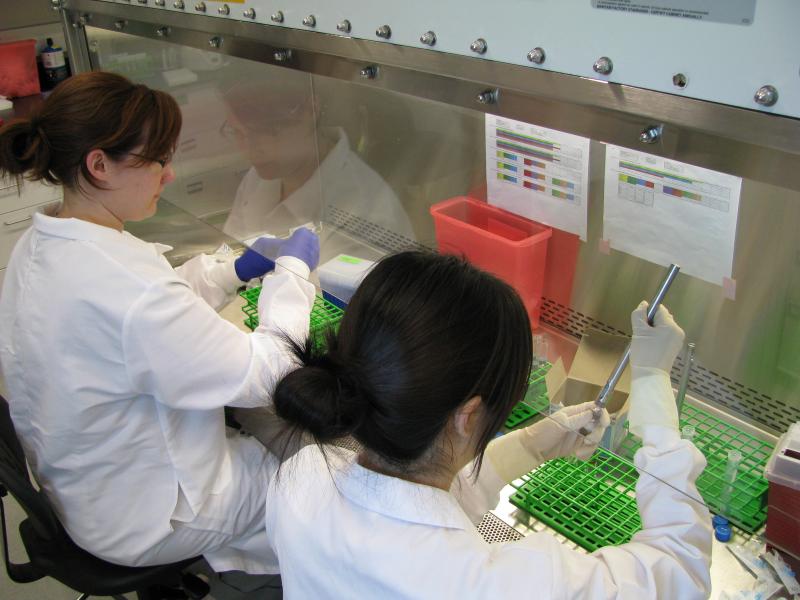 From an algorithm that can diagnose autism, to a flask of bacteria that produces natural pigments for food and cosmetics, innovation at Rensselaer Polytechnic Institute improves lives. The fourth annual Rensselaer Research Showcase on August 23 offered government and private sector research partners an opportunity to learn more about insights emerging from research in biotechnology and the life sciences, and the current climate for the biopharmaceutical economy that work supports. The showcase was held in the Center for Biotechnology and Interdisciplinary Studies, a regional hub of biotechnology research.

“A little over 10 years ago, Rensselaer and New York state worked together to build the Center for Biotechnology and Interdisciplinary Studies, an investment that has helped Rensselaer and the region to become a leader in biotechnology, with our facility attracting $130 million in external research funding over the same time period from federal, state, and industry partners,” said Jonathan Dordick, vice president for research at Rensselaer.  “Our research contributes to a thriving biotechnology economy, but ultimately what we do is intended to help people, by unraveling the mysteries of life and developing knowledge that helps us live better, healthier lives, heal the body and eradicate disease, and developing new technologies for clean energy and sustainable synthesis of chemicals.”

Research at Rensselaer fulfills the vision of The New Polytechnic, an emerging paradigm for higher education which recognizes that global challenges and opportunities are so great they cannot be adequately addressed by even the most talented person working alone. Rensselaer serves as a crossroads for collaboration — working with partners across disciplines, sectors, and geographic regions — to address complex global challenges, using the most advanced tools and technologies, many of which are developed at Rensselaer. Research at Rensselaer addresses some of the world’s most pressing technological challenges — from energy security and sustainable development to biotechnology and human health. The New Polytechnic is transformative in the global impact of research, in its innovative pedagogy, and in the lives of students at Rensselaer.

During the event, Deepak Vashishth, CBIS director and professor of biomedical engineering, discussed how the center has strengthened biotechnology in the Capital Region and its surroundings by educating highly skilled doctoral students, fostering new start-up businesses and licensing new technologies to regional and national companies.

“Through cutting edge research at the interface of science and engineering, we are in the process of biomanufacturing a new class of protein-based drugs and developing new diagnostic and treatment modalities for a number of diseases including Alzheimer’s and neurodegenerative diseases, diabetes and cancer”, Vashishth said.

At the meeting four researchers discussed their work, and its potential applications.

Earlier this year, researchers at Rensselaer announced that they had pioneered a method of creating natural pigments for food coloring and cosmetics using nothing but bacteria and simple sugar. Their work marks the first biosynthesis method that uses four strains of genetically engineered bacteria to manufacture a compound in a single step. Mattheos Koffas, a professor of chemical and biological engineering at Rensselaer and lead researcher, explained his work, and how developing microbial and cell-free processes has the potential to produce high-value chemicals like antibiotics for pharmaceuticals and nutraceuticals.

An algorithm developed by Juergen Hahn, professor and head of the Department of Biomedical Engineering, is the first physiological test for autism, and opens the door to earlier diagnosis and potential future development of therapeutics. Hahn discussed how his approach, bringing “big data” techniques to bear in creating an algorithm that diagnoses autism based on levels of metabolites found in a blood sample.

The flood of healthcare data from patient records and research has the potential to transform healthcare. Kristin Bennett, associate director of the Institute for Data Exploration and Application and professor of mathematical sciences, addressed how new techniques from AI can leverage health records from large pools of patients to help physicians understand health risks of a specific patient and provide individualized recommendations.

The research talks concluded with Suvranu De, director of the Center for Modeling, Simulation, and Imaging for Medicine, discussing his work on reducing medical errors through the development of virtual surgery – an immersive interactive experience where the user is able to touch, feel, and manipulate virtual tissues and organs through surgical tool handles used in actual surgery.  With as many as 440,000 deaths a year, medical errors rank as the third leading cause of death in the U.S., right after cancer and cardiovascular disease. Researchers at Rensselaer envision virtual surgery as a platform for pre-operative planning of complex surgical procedures, ways to create innovative surgical procedures, as well as training, credentialing, and retraining of physicians.

This year’s event was held against the backdrop of threatened cuts to federal funding that could severely impact research at Rensselaer and other universities nationwide.

“At the federal level, we are worried about a very real likelihood of a significant drop in federal research funding leading to a loss in national scientific leadership at a time when the nation needs to be investing in science, research, and innovation so that we can remain competitive globally,” Dordick said. “While many in Congress have expressed opposition to proposed cuts, we must all work together to ensure strong stable funding for federal research agencies.”

Just as federal funds are threatened, New York state has announced a significant investment in the life sciences, with a commitment to $650 million “to grow a new, world-class life sciences research cluster in New York and expand the state’s ability to commercialize research and grow the economy,” according to the New York State Office of the Governor.

The United States biopharmaceutical sector employs nearly 854,000 workers and supports a total of 4.5 million jobs across the country. The industry helps support a vibrant scientific and economic ecosystem that is vital to the U.S. economy and our country’s competitiveness in the global market. In New York state, the Pharmaceutical Research and Manufacturers of American estimates the biopharmaceutical sector provides more than 50,000 direct jobs and supports nearly 200,000 in additional jobs. These jobs range in industry from science, to management, to architecture and engineering, to transportation, and account for more than $19 billion in wages to New York residents.