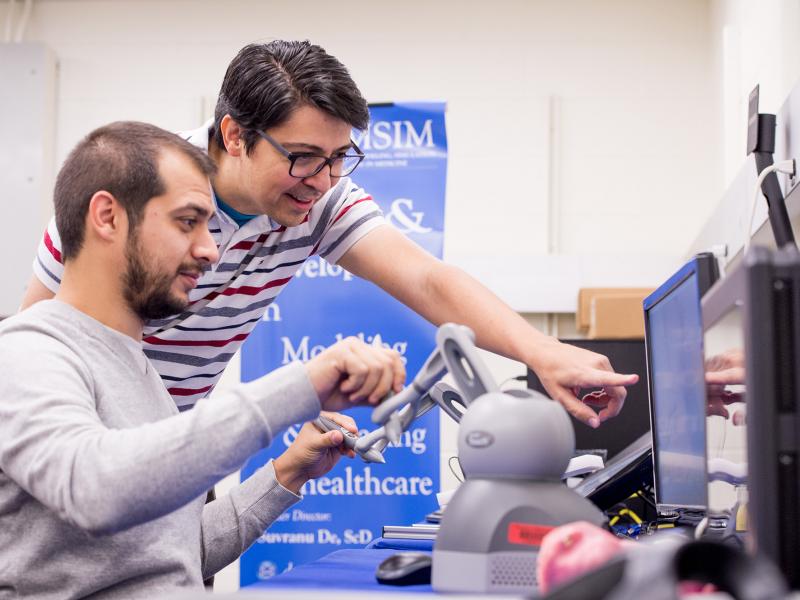 Colorectal surgery is a hands-on activity, but in recent years the effectiveness of traditional assessment methods in evaluating surgeons’ technical skills has been called into question. A team of collaborators with ties to Rensselaer Polytechnic Institute is responding by pioneering the use of virtual reality technologies to train and objectively evaluate colorectal surgeons without putting any patients at risk.

“By developing a virtual reality-based simulator with both visual and touch feedback, we can create a safe educational environment that increases opportunities for colorectal residents to hone their abilities, as well as a way to standardize their training and objectively evaluate their performance without the need for human proctors,” said Suvranu De, the principal investigator on the project and the director of the Rensselaer Center for Modeling, Simulation, and Imaging in Medicine.

Supported with more than $2.6 million from the National Institute of Biomedical Imaging and Bioengineering (NIBIB), De’s team is particularly interested in creating virtual training and evaluation tools for the procedures tested in COSATS, the Colorectal Objective Structures Assessment of Technical Skills.

In 2014, COSATS became the first technical skill examination used in national surgical board certification. Part of the American Board of Colon and Rectal Surgery (ABCRS) examination, the test requires an elaborate setup in which residents must circulate to perform five open surgical tasks and have their work evaluated by board certified surgeons. Some individuals who passed the standard oral and written portions of the ABCRS exam have failed the COSATS.

While virtual reality simulation technology has been developed for colonoscopy and laparoscopic surgical procedures, the open surgical procedures such as the ones used in COSATS present a challenge. For example, they require a fully immersive environment that allows them to see and physically interact with the patient’s anatomy and untethered surgical tools.

“Our aim is to overcome these challenges and to create entirely new tools for educating surgeons safely and effectively,” De said. “This is a highly multidisciplinary project involving engineering, haptics, computer graphics, artificial intelligence, surgery, and human factors.”

In addition to designing, developing, and evaluating the first Virtual Colorectal Surgical Trainer for the five open surgical tasks in the COSATS, the team hopes to create the first Virtual Intelligent Preceptor, which will be an intelligent agent that will help surgeons learn important technical skills.

De observed that the team behind the project personifies the academic legacy and continuing collaborations that emanate from Rensselaer.

His co-investigators include Tansel Halic, a former doctoral student of De’s who is now an associate professor at the University of Central Arkansas, and Ganesh Sankaranarayanan, who spent eight years in various capacities including research assistant professor in De’s group before moving to his current position as assistant director of the Center for Evidence-based Simulation at Baylor University Medical Center in Dallas, Texas. James Fleshman, past president of the ABCRS and chief of surgery and the Helen Buchanan and Stanley Joseph Seeger Endowed Professor and chairman of the Department of Surgery at Baylor University Medical Center, is also on the team.