Making Flight Safer With the “Internet of Airplanes” 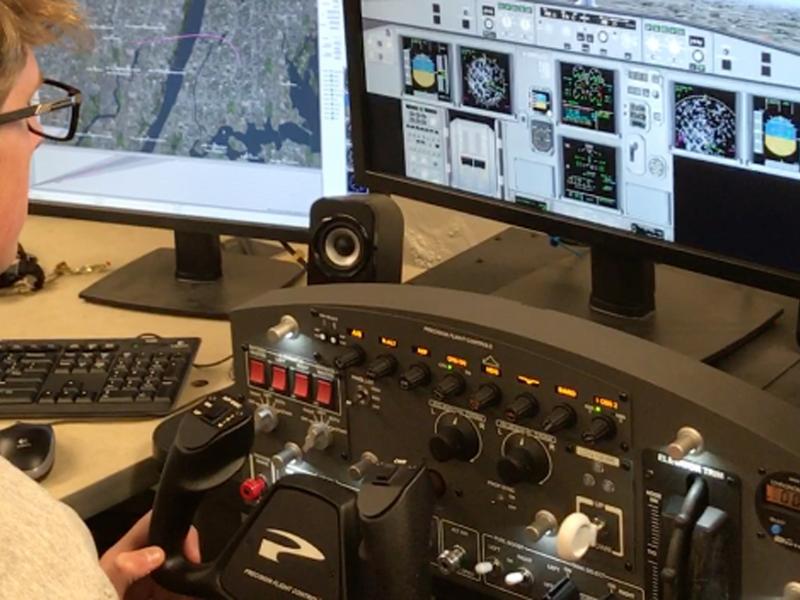 Making Flight Safer With the “Internet of Airplanes”

Researchers envision a future in which airplanes in flight share sensor data across an “internet of airplanes” to improve safety and efficiency. But when nodes in the network move at the speed of flight, realizing that vision requires a data sharing framework adapted to the challenges and needs of the environment.

With a three-year $325,000 grant from the National Science Foundation, Rensselaer Polytechnic Institute computer scientists Stacy Patterson and Carlos Varela have teamed up to develop a prototype framework, the “Virtual Sky” platform, to fuse and analyze flight sensor data correctly, reliably, and quickly. Virtual Sky would serve as a model extension of the Federal Aviation Administration’s Next Generation Air Transportation System, a sweeping modernization of the National Airspace System that includes greater use of computer and satellite systems in air traffic elements like communication, navigation, weather, information management, and tracking.

“We see Virtual Sky as an infrastructure, and like the infrastructure of the internet, it will have basic protocols, and basic ways to transmit data, on top of which applications will be built,” Varela said.

Although some elements of air traffic have already transitioned to “NextGen” systems, a surprising amount of the information shared between airplanes depends on radio transmissions between pilots, and pilot observations, leaving much room for improvement.

The challenge, Patterson said, is that an “internet of airplanes” is a dynamic environment, with airplanes moving in multiple dimensions, directions, and speeds, and with varying connectivity.

“Airplanes are not able to exchange information with other planes for long periods of time, so you have to make smart decisions about what information you’re going to send when you have that little window of opportunity,” Patterson said. “We also have to decide how to integrate the information to give pilots a unified view that says that these are the flight conditions around you based on all the information we have available.”

The project builds on the combined experience of the researchers. Varela, an associate professor of computer science, is a licensed pilot and a middleware architecture expert with extensive domain knowledge researching computer systems that monitor and detect faulty aircraft sensor readings. A system he developed in 2014 detects and corrects faulty airspeed readings, such as those that contributed to 2009 crash of Air France flight 447. Patterson, an assistant professor, is an expert in distributed algorithms, sensor networks, and the Internet of Things and has also been developing automobile sensor networks.

The prototype Virtual Sky platform will leverage a 2020 NextGen requirement that airplanes operating in certain locations, including Class A, B, and C airspaces, be equipped with Automatic Dependent Surveillance-Broadcast (ADS-B) transmitters. In anticipation of the requirement, many airplanes already carry ADS-B equipment, enabling them to exchange limited digital data, such as satellite-based position, altitude, heading, ground speed, and type of aircraft.

The new protocols and algorithms of the platform will use the ADS-B equipment to selectively share some of the massive amounts of sensor data – meteorological, mechanical, environmental – modern airplanes collect, providing airplanes in the same neighborhood with an accurate assessment of present conditions. The researchers will test the system with pilots on a flight simulator.

“In commercial aviation, humans will ultimately make the decision. But a computer can give a much faster and more accurate assessment of the current conditions, and that can help the humans in the situation make better decisions,” Varela said.