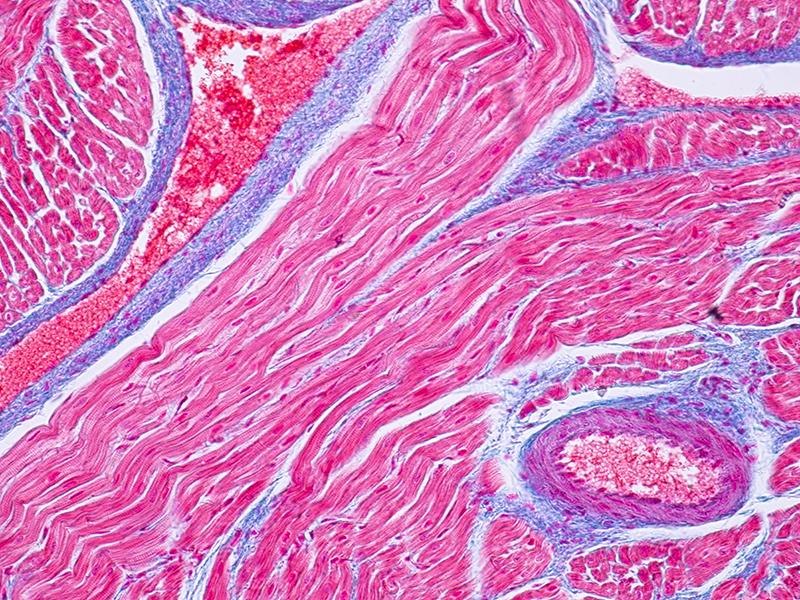 Understanding mutations may lead to treatments for hypertrophic cardiomyopathy

Hypertrophic cardiomyopathy is best known for revealing itself in one certain way: as an unexpected, fatal heart attack during strenuous exercise. But researchers suspect as many as 300 mutations can individually cause enlargement of the heart that renders it vulnerable to strain. Recent studies examining three of those mutations at the molecular level found separate mechanisms at work, said Rensselaer Polytechnic Institute muscle protein and contraction expert Doug Swank, whose most recent paper on the topic was published today in the Journal of Physiology.

“Our work suggests that a simple one-size-fits-all hypothesis about how these mutations lead to an enlarged heart and to the disease is not likely to be the case. It’s likely to be multiple mechanisms, perhaps depending on where the mutation is found in the protein or what it does to the protein,” said Swank, a professor of biological sciences and member of the Rensselaer Center for Biotechnology and Interdisciplinary Studies.

Swank’s research on hypertrophic cardiomyopathy is being conducted in collaboration with researchers at San Diego State University and Johns Hopkins University, with support from the National Institutes of Health.

The current paper and a previous study published in eLife in 2018 examine two mutations in myosin, a lever-shaped muscle protein that generates force to contract heart muscle tissue. Like all proteins, muscle proteins are chains of amino acids twisted into a three-dimensional shape that determines their function. But mutations slightly alter the composition of the amino acid chain, which also changes the shape of the protein and its performance.

Swanks’ lab expresses the mutation in the wing muscle of a fruit fly, making it possible to examine how the mutations impact mechanical properties like force production, work and power. The eLife study looked at a mutation in myosin known as K146N (the mutation name is derived from the name of the affected amino acid residue and how it is altered in myosin). Examinations of fruit fly muscles with this mutation supported the “increased contractility hypothesis,” which proposes that the heart is spending more time in a contracted state than in a relaxed state.

“Our results for K146N indicated that the myosin bound longer to actin than it normally does,” said Swank. “Considering that hundreds of these myosin molecules are doing this all the time, if they stay bound longer, at any given time you’re going to have more myosin heads bound and pulling together than you otherwise would. So that gives you more force.”

But the newly released Journal of Physiology study looked at an R249Q mutation and found a nearly opposite result. Fruit fly muscle with a R249Q mutation, which typically produces a less severe form of the disease, generated less force, less work, and less power. Swank said this result suggests that, in the heart, such a mutation is unlikely to be causing increased contractility – and yet it yields a similar outcome.

“Especially with his recent work, Dr. Swank has put Rensselaer on the map in muscle physiology,” said Curt Breneman, dean of the Rensselaer School of Science. "The quality of his research reflects well on our Department of Biological Sciences, the School of Science, and the Institute as a whole.”

A third study to be published in the near future describes a mechanism for a mutation in another heart protein.

“Our hope is that, as we continue to understand how these mutations affect muscle contraction, a few general mechanisms will emerge which will make it possible to devise a group of treatments to address the disease,” said Swank.