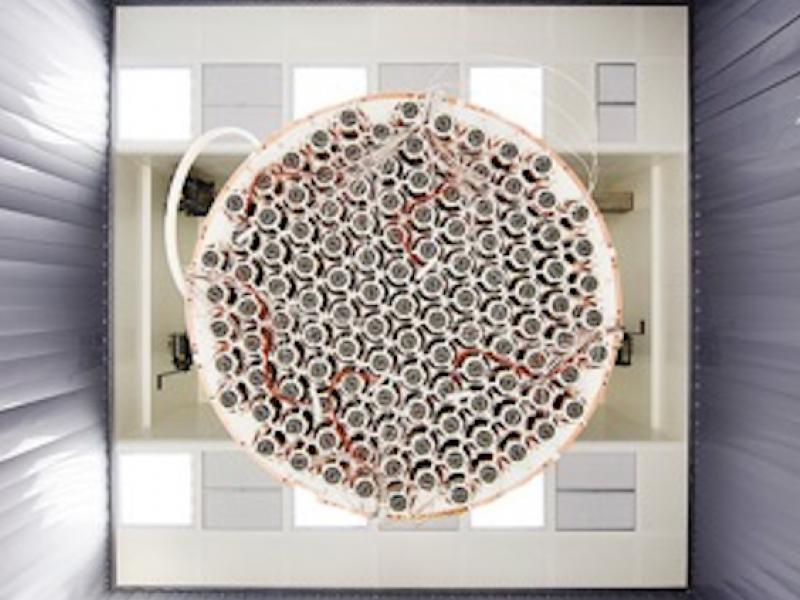 How do you observe a process that takes more than one trillion times longer than the age of the universe? The XENON Collaboration research team did it with an instrument built to find the most elusive particle in the universe – dark matter.  In a paper to be published tomorrow in the journal Nature, researchers announce that they have observed the radioactive decay of xenon-124, which has a half-life of 18 sextillion (that’s 18 followed by 21 zeros) years.

“We actually saw this decay happen. It’s the longest, slowest process that has ever been directly observed, and our dark matter detector was sensitive enough to measure it,” said Ethan Brown, an assistant professor of physics at Rensselaer, and co-author of the study. “It’s an amazing to have witnessed this process, and it says that our detector can measure the rarest thing ever recorded.”

The XENON Collaboration runs XENON1T, a 1,300-kilogram vat of super-pure liquid xenon shielded from cosmic rays in a cryostat submerged in water deep 1,500 meters beneath the Gran Sasso mountains of Italy. The researchers search for dark matter (which is five times more abundant than ordinary matter, but seldom interacts with ordinary matter) by recording tiny flashes of light created when particles interact with xenon inside the detector. And while XENON1T was built to capture the interaction between a dark matter particle and the nucleus of a xenon atom, the detector actually picks up signals from any interactions with the xenon.

The evidence for xenon decay was produced as a proton inside the nucleus of a xenon atom converted into a neutron. In most elements subject to decay, that happens when one electron is pulled into the nucleus. But two protons in a xenon atom must simultaneously absorb two electrons to convert into two neutrons, an event called “double-electron capture.”

Double-electron capture only happens when two of the electrons are right next to the nucleus at just the right time, Brown said, which is “a rare thing multiplied by another rare thing, making it ultra-rare.”

When the ultra-rare happened, and a double-electron capture occurred inside the detector, instruments picked up the signal of electrons in the atom re-arranging to fill in for the two that were absorbed into the nucleus.

“Electrons in double-capture are removed from the innermost shell around the nucleus, and that creates room in that shell,” said Brown. “The remaining electrons collapse to the ground state, and we saw this collapse process in our detector.”

The achievement is the first time scientists have measured the half-life of this xenon isotope based on a direct observation of its radioactive decay.

“This is a fascinating finding that advances the frontiers of knowledge about the most fundamental characteristics of matter,” said Curt Breneman, dean of the School of Science. “Dr. Brown’s work in calibrating the detector and ensuring that the xenon is scrubbed to the highest possible standard of purity was critical to making this important observation.”

The XENON Collaboration includes more than 160 scientists from Europe, the United States, and the Middle East, and, since 2002, has operated three successively more sensitive liquid xenon detectors in the Gran Sasso National Laboratory in Italy. XENON1T, the largest detector of its type ever built, acquired data from 2016 until December 2018, when it was switched off. Scientists are currently upgrading the experiment for the new XENONnT phase, which will feature an active detector mass three times larger than XENON1T. Together with a reduced background level, this will boost the detector’s sensitivity by an order of magnitude.

Brown’s participation on the project is funded with a grant from National Science Foundation.