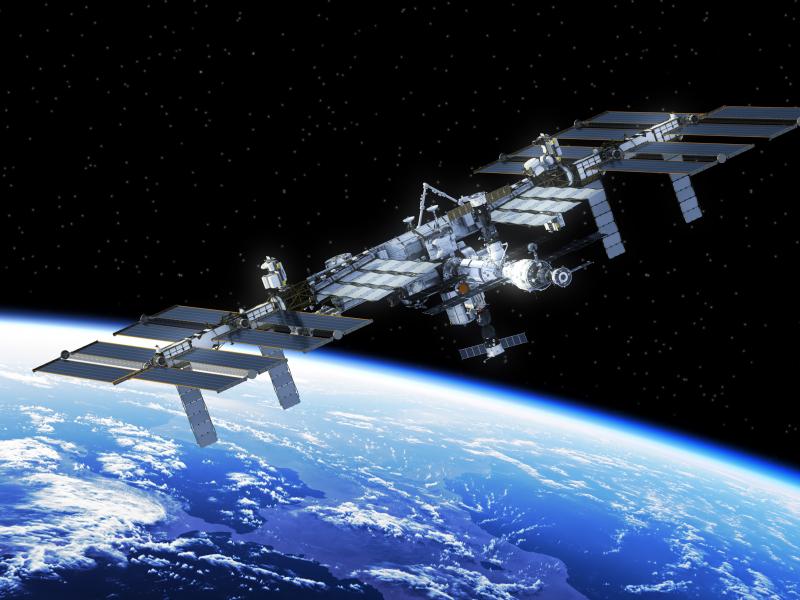 TROY, N.Y. – A unique experiment seeking to learn more about the mechanics of diseases like diabetes, Alzheimer’s, and Parkinson’s will soon be conducted in space, and is being led by a research team at Rensselaer Polytechnic Institute.

Amir Hirsa, a professor of mechanical, aerospace, and nuclear engineering at Rensselaer, has developed a novel approach for studying fluid dynamics in a way that more closely mimics many aspects of the human body. The only hitch is that it requires a microgravity environment, so the best place to test it out is the International Space Station (ISS).

To see the preparations for the experiment, watch this video.

“People are realizing that fluid dynamics is not a secondary issue; it may be a primary issue physiologically,” Hirsa said. “Understanding the relationship between fluid flow and amyloid formation might be a small but important step in understanding a disease and working toward a cure.”

Amyloid fibrils are clusters of proteins that are linked to neurodegenerative diseases. Fluid motion in the body causes shear stress, which increases the rate at which proteins lose their natural form and turn into fibrils. Studying this process on Earth is complicated by containers—needed to hold the fluid—interfering with the fibril formation process.

Hirsa developed a concept, which he calls a “ring-sheared drop,” that will allow fluid dynamics to be studied without a container. In a microgravity environment, Hirsa points out, surface tension can hold the fluid together. This will allow researchers to observe how proteins react to stress without having to account for how the solid walls of a dish may also be affecting them.

On July 21, a rocket bound for the ISS is scheduled to launch from Cape Canaveral Air Force Station in Florida. Among other things, it will be carrying hardware built by NASA—inspired by Hirsa—and samples of the human recombinant insulin protein prepared by Hirsa’s group to be used in this experiment.

Once it is underway, a syringe will dispense a large drop of liquid made up of water and dissolved insulin. The drop will attach to a stationary thin ring on one side and another thin ring on the other side that can rotate. The rotating ring can be spun to shear the protein, significantly accelerating the formation of amyloids.

Prior to the launch, NASA engineers and contractors traveled to Rensselaer for a week to certify the team’s samples for flight. The NASA team also set up a communications network in the basement of the Jonsson Engineering Center at Rensselaer, where Hirsa’s team will continuously monitor the experiment as it remains in space for weeks. The researchers will be able to control the level of shear, and operate a microscope and other probes that monitor protein fibril formation.

“The fact that we are taking something on Earth that we can’t really study on Earth and going to space in order to rule out some variables is incredibly interesting,” said Nick Debono, an aerospace engineering doctoral student who is part of Hirsa’s research team. “Even more interesting is that it’s never been done before.”

This project brings together engineers from multiple disciplines in a collaborative style that is a hallmark of the Center for Biotechnology and Interdisciplinary Studies at Rensselaer, of which Hirsa is a part. As an expert in fluid mechanics and aerodynamics who is applying his fundamental knowledge to life sciences, Hirsa embodies this approach.

CBIS is also home to a predoctoral program, funded by the National Institutes of Health, geared toward finding new ways to diagnose and treat Alzheimer’s using technologically driven interdisciplinary approaches.

“This is a dream come true,” Hirsa said. “Being able to help with human health research wasn’t in my original training, but thank God I was able to apply fundamental science to something that’s really exciting and affects a large portion of society.”

The project also reflects the legacy at Rensselaer of working with NASA to push the boundaries of exploration in space for the benefit of humankind.

Hirsa hopes this method will be used by other research teams aboard the ISS in the future. If the concept works, he plans to expand his team’s investigation to other proteins like the ones associated with Alzheimer’s.

The Rensselaer researchers envision future experiments where they mimic what happens in the body even further by coating the ring-sheared drop with the oily films that form our cell membranes. Their work could even enable future development of pharmaceuticals on Earth and in space.

“If this experiment is successful, there are different avenues where you can actually use the developed hardware and technology to study, for example, bacterial film formation at interfaces in space,” said Aditya Raghunandan, a mechanical engineering postdoctoral fellow working on this research. “Also, if the pharmaceutical industry develops a new drug to cure Alzheimer’s, or cure Parkinson’s, we can use the ring-sheared drop to understand the stability and efficacy of the new drug in the presence of stress and interfaces.”