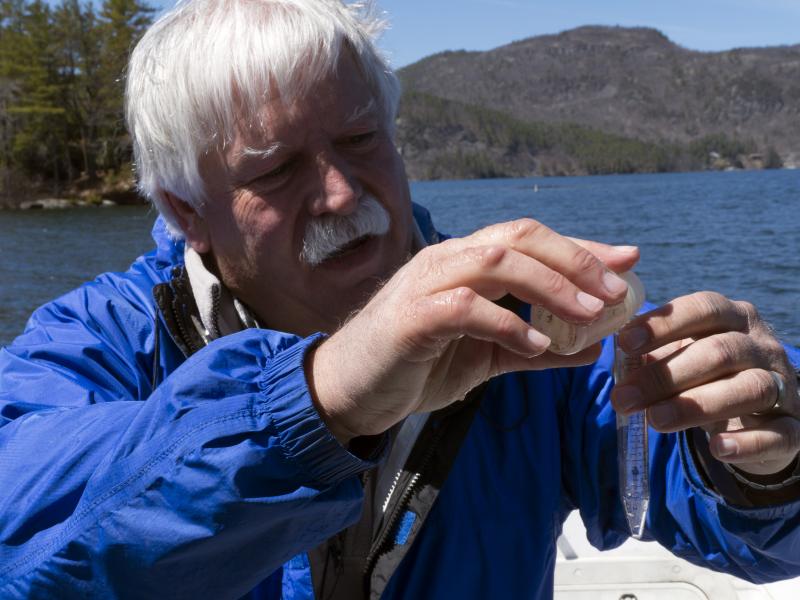 Although concentrations of chemicals and pollutants like salt and nutrients have increased in the deep waters of Lake George, they’re still too low to harm the ecosystem at those depths, according to an analysis of nearly 40 years of data published today in Limnology and Oceanography. However, the changes in the deep water sound an early warning for what are likely much larger impacts in the streams, wetlands, and shallow waters that rim the lake.

The Offshore Chemistry Program (OCP), run by Rensselaer Polytechnic Institute’s Darrin Fresh Water Institute, has been monitoring the deep waters of Lake George for 40 years. The Limnology and Oceanography paper, which also includes information on climate change, acid rain, and water transparency, presents results from the first 37 years. The analyses expand on an earlier report, published by Rensselaer and The FUND for Lake George, that assessed the first 30 years of data. That report inspired the creation of The Jefferson Project at Lake George, a pioneering collaboration of Rensselaer, IBM Research and The FUND for Lake George using advanced technology to vastly expand on the picture of the lake that the OCP produces.

“There are very few lake studies in the world that have given us such a wealth of information over time as the Offshore Chemistry Program,” said Rick Relyea, director of the Darrin Fresh Water Institute and the Jefferson Project. “Thanks to that long-term commitment, we have discovered that the deep waters of the lake are fairly resilient to human impacts. This insight has shifted our research focus from the deep water to the shallow water, streams and wetlands, places that are probably a lot less resilient and where most of the human impacts are being felt.”

“Levels of salt, the nutrient orthophosphate, and chlorophyll — an indirect measure of the floating algae that feed on orthophosphate — have increased substantially, but as far as we can determine, none are at a level that will cause harm, and that’s good news,” said Hintz, now an assistant professor at the University of Toledo. “We’re fortunate to have this early warning. We know how to bring those levels back down, and we have time to reverse these trends before they cause harm.”

“Updated findings of the lake’s offshore chemistry program demonstrate the continuing resilience of Lake George to a growing array of stressors while also underscoring the need to focus research closer to shore and the human activities associated with increasing pressures on water quality — from wastewater and stormwater to road salt impacts,” said Eric Siy, executive director of The FUND for Lake George. “The groundbreaking work of the Jefferson Project is responding to this need to gain a fuller understanding of lake and watershed conditions that can inform policy measures designed to maintain the lake’s outstanding water quality,” Siy said.

“It is exceptionally gratifying to see what began as a couple of researchers monitoring the lake in the early 1980s to what has become the internationally recognized Jefferson Project today,” said Lawrence Eichler, a Rensselaer research scientist and author of the study who has led the OCP effort for nearly all of the 40 years. “The incremental changes reported over the past 37 years are a testament to the lake’s resilience. However, Lake George’s resilience is not unlimited.”

Lake George is famed for the transparency of its water, and the study found that — despite increases in chlorophyll — transparency has not decreased over 37 years, and actually improved at one site. Transparency currently averages about nine meters deep across the lake.

Orthophosphate increased by 70%, from 0.72 to 1.23 micrograms per liter, a change that might be attributable to natural causes, but is more likely coming from improperly functioning septic systems, failing wastewater treatment systems, and stormwater runoff.

Levels of total phosphorus, which includes orthophosphate as well as forms of phosphorus bound in the bodies of living and dead organisms, have remained steady at about 4 micrograms per liter.

Concentrations of calcium, which is needed to build the shells of invasive species like Asian clams and zebra mussels, have risen by 14%, but this represents a small absolute increase from 10.4 to 11.2 milligrams per liter. To sustain zebra mussels, which are currently isolated near structures like concrete piers that leach calcium into the lake, calcium levels would need to reach about 20 milligrams per liter.

Discussions prompted by the previous 30-year report have already led to efforts to curb applications of road salt, the principal source of increased salt levels in the basin, demonstrating the potential rewards of heeding early warning signs.

The researchers also saw improvements in the levels of sulfates and nitrates, the chemicals in “acid rain,” which have decreased as a result of the Clean Air Act. Over 37 years, sulfate declined by 55% and nitrate decreased 54%, with a concurrent increase in pH and alkalinity, which are considered good signs of recovery from acid rain deposition.

The Clean Air Act confronted acid rain, but no similar mechanism has been established to tackle climate change, which is showing its effects on Lake George. Mean temperatures in the upper waters of the lake rose by 1.8°C, or 0.05°C per year.

“Taken together, the OCP tells us that in nearly 40 years of human activities, the lake has changed in a number of ways, often not in good directions. These changes have been relatively small, but they serve as a wake-up call. We have the ability to adjust our impacts on the lake and restore it to a more pristine condition,” said Relyea.

Research for “Concurrent improvement and deterioration of epilimnetic water quality in an oligotrophic lake over 37 yr” was initially funded by Rensselaer and The FUND for Lake George, and since 2014 has been funded by all three partners in The Jefferson Project at Lake George. At Rensselaer, Relyea, Hintz, and Eichler were joined by Matthew Schuler, Jonathan Borrelli, Aaron Stoler, Laurie Ahrens, Charles Boylen, and Sandra Nierzwicki-Bauer. Vincent Moriarty of IBM Research also contributed to the research.