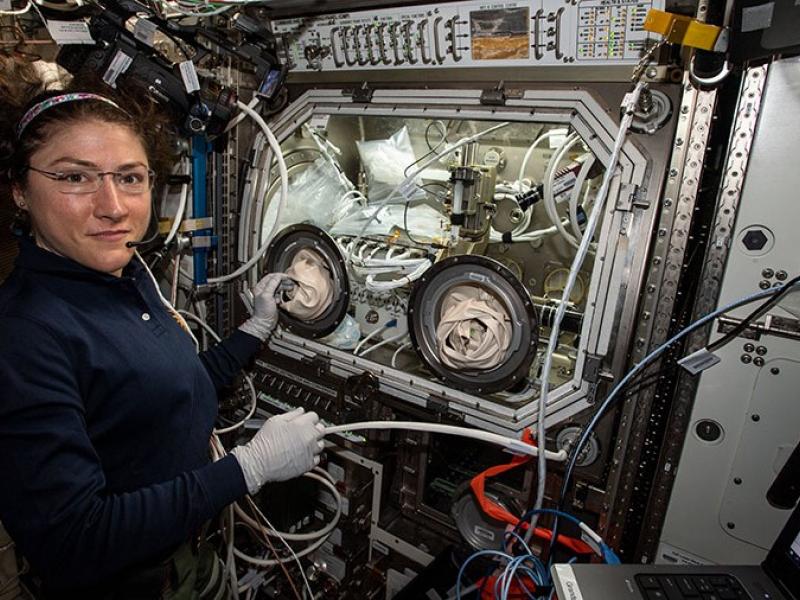 TROY, N.Y. — In an article published recently in Microgravity, a Nature journal, researchers at Rensselaer Polytechnic Institute demonstrate a unique method for studying the mechanisms behind the formation of amyloid fibrils associated with diseases like Alzheimer’s and Parkinson’s.

The concept, developed by Amir Hirsa, a professor of mechanical, aerospace, and nuclear engineering at Rensselaer, is known as the “ring-sheared drop” (RSD). It takes advantage of the microgravity environment provided by orbiting in space to study the effect of shear stress on a drop of protein fluid without interference from the walls of a petri dish that would traditionally be used to hold the drop on Earth.

Using this method, a syringe dispenses a large drop of liquid into a zero gravity environment. The only thing keeping it from floating around are two thin metal rings. One of those rings can rotate, shearing — or applying stress to — the protein. The team is trying to understand how shear stress affects, or even speeds up, the formation of amyloid fibrils.

This technology is currently being used for an experiment aboard the International Space Station to study the protein insulin. You can hear Hirsa discuss this here. What researchers find could lead to a greater understanding of what happens when proteins move within the human body and whether that contributes to the formation of fibrils.

In this paper, the team continues to learn about the physics associated with the RSD technology by simulating a microgravity environment on the ground. The researchers offset the effects of gravity by floating the liquid drop in another liquid of the same density. What they discovered, Hirsa said, was unexpected.

“We found that the drop deformation is a result of a balance between the effects of viscosity and inertia, on the one hand, and surface tension on the other,” said Hirsa, who is also a member of the Center for Biotechnology and Interdisciplinary Studies at Rensselaer.

That careful balance allowed the team to also learn that the drop can be sheared, or spun up, more than the researchers were expecting.

The grant, from the National Science Foundation, will assist the team’s study of monoclonal antibodies, which are proteins used in many pharmaceuticals. Hirsa and his lab want to research the fluid mechanics of these proteins so they can understand the best ways to manufacture drugs that contain them.

For example, this foundational research could help a pharmaceutical company understand what happens when it goes to scale up the production of a drug that has been made in a lab.

The research project, which is a partnership with Arizona State University, will lay the groundwork in preparation for the first time Hirsa’s unique method is used to test a protein relevant to the manufacturing of pharmaceuticals aboard the ISS.