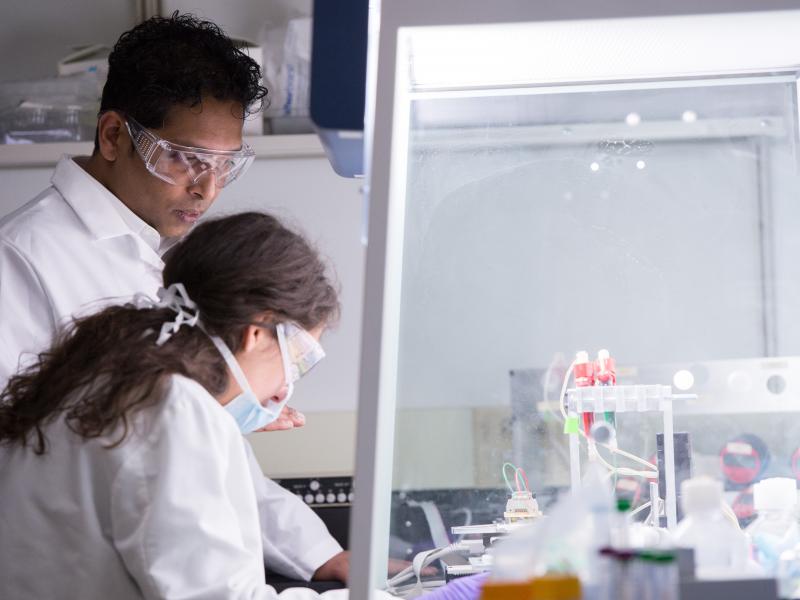 TROY, N.Y. — Chemically engineered peptides, designed and developed by a team of researchers at Rensselaer Polytechnic Institute, could prove valuable in the battle against some of the most persistent human health challenges.

The team’s findings, recently published in Nature Scientific Reports, demonstrate how researchers can engineer peptides capable of selectively and specifically binding to polysialic acid (PSA) — a unique carbohydrate that is present on critical human cells and plays a key role in various physiological and pathological processes, including neurological development and disease progression.

This foundational research lays the groundwork for further study into the ability of these peptides to provide an effective vehicle for therapeutics in the treatment of diseases such as Alzheimer’s, Parkinson’s, and cancer. The team’s findings suggest the peptides may also prove valuable in providing a barrier between cells and viruses, such as the one that causes COVID-19 – a possibility the research team now hopes to study.

“Because these peptides bind to PSA, they also mask PSA, and could potentially be used to inhibit the binding of viruses and their entry into cells,” said Pankaj Karande, an associate professor of chemical engineering, a member of the Center for Biotechnology and Interdisciplinary Studies (CBIS), and one of the lead authors on this paper. “The idea is to see if these peptides could inhibit that interaction and therefore inhibit the infectivity of those viruses.”

Taking inspiration from nature, Karande said the team modeled its peptides based on the binding of proteins known as Sialic acid-binding immunoglobulin-type lectins, or Siglecs, which occur naturally and inherently bind to sialic acids.

The research laid out in the paper was also led by Divya Shastry, a former doctoral student in biological sciences at Rensselaer. It was completed in collaboration with Robert Linhardt, an endowed professor of chemistry and chemical biology, and Mattheos Koffas, an endowed professor of chemical and biological engineering, both of whom are members of CBIS as well. The Rensselaer team also worked with a team from Syracuse University that used computational modeling to provide the Rensselaer researchers with a molecular-level look at the peptides they designed.

“These significant and promising research advances are a prime example of how a collaborative approach can solve persistent human health challenges,” said Deepak Vashishth, the director of CBIS.