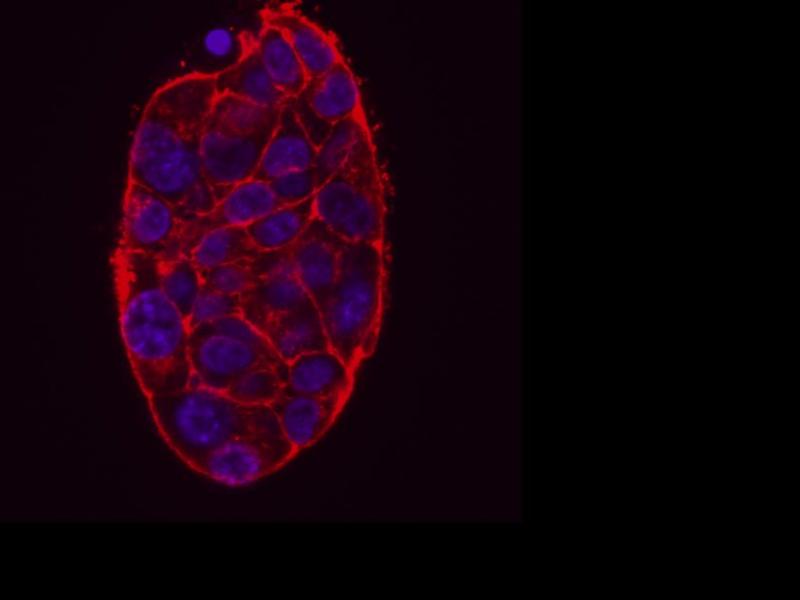 Colon cancer cells in an aggregate embedded in a bioinert hydrogel

As cancer and tumor cells move inside the human body, they impart and are subject to mechanical forces. In order to understand how these actions affect cancer cell growth, spread, and invasion, a team of engineers at Rensselaer Polytechnic Institute is developing new models that mimic aspects of the mechanical environment within the body, providing new insight into how and why tumors develop in certain ways.

In research published today in Integrative Biology, a team of engineers from Rensselaer developed an in vitro — in the lab — lymphatic vessel model to study the growth of tumor emboli, collections of tumor cells within vessels that are often associated with increased metastasis and tumor recurrence.

“The growth of tumor emboli is important for the spread and metastasis of certain types of cancers. For example, inflammatory breast cancer has this growth pattern of just massive spread of emboli growing within dermal lymphatic vessels, in the breast, and it’s very aggressive in that way,” said Kristen Mills, an assistant professor of mechanical engineering at Rensselaer, who led this research. “This growth of tumor emboli hasn’t really been studied very much.”

Previous tumor models in the lab have used unconstrained spheroids of tumor cells that don’t allow researchers to study the mechanical interactions that truly happen within the physical boundaries of a tubular-shaped vessel. To more closely mimic what happens in the body, Mills and her team modeled a lymphatic vessel in the lab using a small channel in a gel. They placed these channels within either stiff or soft bioinert gel, in order to mimic the constraints that tumor emboli may encounter in stiff, diseased tissue, or soft, healthy tissue.

To incorporate the varying growth behaviors of cells, the team used breast and colon cancer cell aggregates to model the emboli, one which is more aggressive, the other less.

Researchers found that the model of a stiff tumor environment constrained both types of tumor emboli to the cylindrical channel, causing rapid growth of the emboli along the vessel. But, they found that the growth of the cancer cells was different, based on their type, in the softer matrix model, which mimics healthy colon or breast tissue.

Growth along a vessel or channel is problematic, Mills said, because the cells within the tumor have constant access to life-sustaining nutrients through the vessel wall. When the tumor cells grow in a sphere and begin to bulge, Mills said, the cells in the center of that mass get farther and farther away from nutrients until they are cut off and eventually die. This information could be critical for therapeutic design and prescription.

“We think this is important because it somehow suggests that, if the tumor tissue surrounding these vessels has been abnormally stiffened through disease, or if — for example — the breast tissue is already denser or stiffer, you might really see much more growth within the vessels than with a softer tissue,” said Mills, who is also a member of the Center for Biotechnology and Interdisciplinary Studies (CBIS) at Rensselaer.

Jonathan Kulwatno, a graduate student in biomedical engineering at Rensselaer, was first author on this paper. Mills and Kulwatno collaborated with researchers from Mount Sinai.

This unique, mechanical engineering approach to studying cancer is a hallmark of the transformative work being done within CBIS, where researchers like Mills can collaborate across disciplines with other engineers and scientists working in similar areas.

“Professor Mills’ engineering approach to studying cancer is laying a critical foundation, where interdisciplinary approaches are used to understand the mechanobiology of cancer with an eventual therapeutic goal,” said Deepak Vashishth, the director of CBIS.

As Mills and her team continue their research, she said, they look for new ways to make these models more complex without losing the ability to isolate critical mechanical mechanisms.