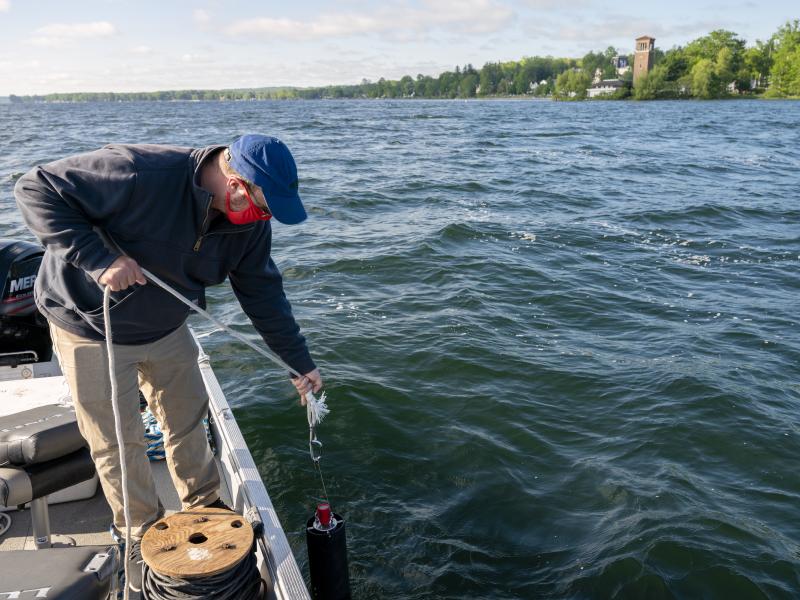 Organic Materials in Martian Meteorite Formed by Interactions Between Water and Rock
Rensselaer Scholars To Build and Test Prototype To Monitor Water Quality for Nitrogen
Cryptocurrency is volatile, yes. But is it just a trend, or here to stay?
Gauging the Resilience of Complex Networks
Climate Change in the Capital Region: The Real Impact
June 21, 2021

The Jefferson Project at Lake George — a groundbreaking collaboration between IBM Research, Rensselaer Polytechnic Institute, and The FUND for Lake George — is expanding its statewide leadership role in the study of harmful algal blooms and other water-quality threats this summer with a new $1 million research project on Chautauqua Lake in Chautauqua County, made possible through funding from Chautauqua Institution and a county coalition. The new research complements The Jefferson Project’s foundational research program on Lake George in Warren County, now in its eighth year.

Both Chautauqua Lake and Lake George are among the 12 priority waterbodies identified for special protective efforts by New York State, as part of its harmful algal bloom (HAB) initiative, and are at extreme ends of the HAB spectrum. Chautauqua Lake has been severely impacted by HABs for decades, particularly in its southern basin, while Lake George — widely regarded as one of the clearest and cleanest lakes in the country — experienced its first confirmed HAB last fall. The Lake George HAB was relatively small and short-lived, and samples gathered at the time are now the subject of an intensive scientific analysis by Jefferson Project researchers to determine its cause.

Given the two lakes’ widely differing HAB histories, The Jefferson Project’s leaders say the data gathered on both lakes this summer will help them better understand the conditions that lead to the potentially devastating blooms and the actions that can be taken to prevent them. The Chautauqua Lake research began with a pilot program last year.

The Jefferson Project at Lake George combines Internet-of-Things (IoT) technology and powerful analytics with science to create a new model for environmental monitoring and prediction. The Project’s work is centered around a Smart Sensor Network that is deployed on lakes and surrounding watersheds to monitor the weather, the streams that feed the lakes, the water conditions from the lake surface to the lake bottom, and the circulation patterns of the water. The Smart Sensor Network captures immense amounts of water-quality data that are complemented by physical samples of the water chemistry and biota — from genes and toxins to the entire ecosystem — which together feed powerful computer models and inform a wide variety of experiments. Collectively, these data will help The Jefferson Project researchers — who are collaborating with other researchers in the region — pinpoint existing threats, identify and predict future threats, and develop science-guided solutions and best practices to protect the lakes for today and future generations.

“The Jefferson Project focus on the genomic basis of the evolution of HABs to produce harmful cyanotoxins is critical to protecting freshwater systems, especially lakes in New York State,” said Rensselaer President Shirley Ann Jackson. “Rensselaer Polytechnic Institute is excited to contribute its expertise in this arena to this important work.”

“We are pleased to expand The Jefferson Project to Chautauqua Lake through the application and translation of technologies developed at Lake George, including our intelligent Hybrid Cloud Computing platform for environmental monitoring and predictive modeling. State-of-the-art technologies including AI provide us with a complement of tools to address water-quality issues, environmental stressors, and to better understand and predict HABs phenomena within the context of a changing climate,” said John E. Kelly III, retired executive vice president of IBM, and now special advisor to the Chairman and CEO.

"The teaming of The Jefferson Project with Chautauqua Institution will powerfully advance the science that will discover the root causes and drivers of HABs — benefiting not only Lake George and Chautauqua Lake, but lakes across New York State and around the world,” said Jeff Killeen, chairman of The FUND for Lake George. “Only with definitive science will we be able to surgically focus on true HABs solutions and remediation."

“Our strategic plan names the conservation of Chautauqua Lake among our four top strategic objectives over the next decade, and this investment is reflective of that priority and our commitment to the lake and the watershed that we call our home. The Jefferson Project brings to Chautauqua Lake the most advanced environmental monitoring, analytical technology, and skills in the world,” said Michael E. Hill, president of Chautauqua Institution. “Coupled with the extensive data they have collected on Lake George over nearly a decade of groundbreaking work there, we believe The Jefferson Project will make a meaningful difference in the health of our lake for generations to come.”

Chautauqua Institution is a community on the shores of Chautauqua Lake in southwestern New York state that explores critical issues of the day through multidisciplinary and intergenerational experiences, leading toward solutions and positive action.