Rensselaer Welcomes Congressional Bipartisan Discussion on the Future of Energy 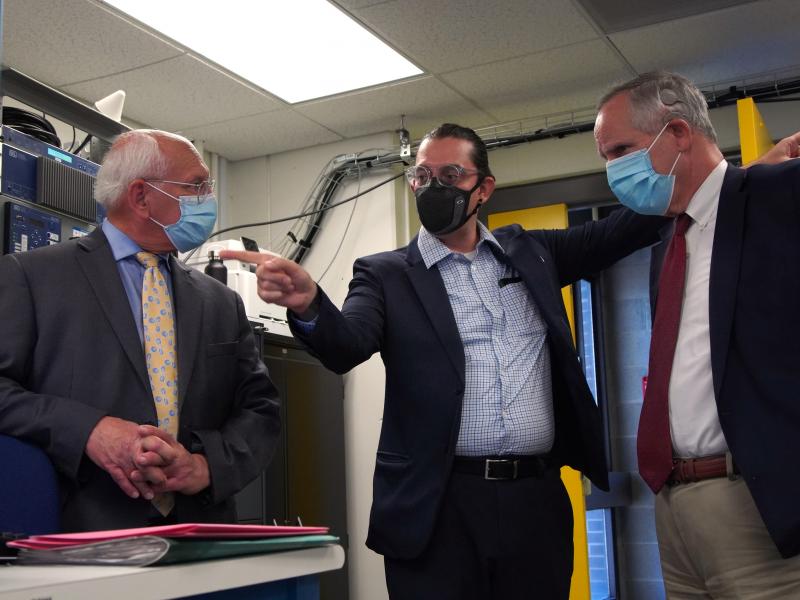 Rensselaer Welcomes Congressional Bipartisan Discussion on the Future of Energy

Faculty from Rensselaer Polytechnic Institute served as experts in an exchange of information about developments in the field of sustainable energy, large-scale environmental change, and innovative and interdisciplinary research into energy storage and smart systems in the built environment on a recent visit by two members of the U.S. Congress.

Congressman Paul Tonko (D-NY) and Congressman David B. McKinley (R-WV) toured the Rensselaer campus to highlight the scientific advances being made that will drive the green economy and renewable energy for the region, the nation, and the world.

Both Representatives are members of the House Energy and Commerce Committee. Rep. Tonko is the chair of the Subcommittee on Environment and Climate Change; Rep. McKinley is the ranking member on that same subcommittee.

During their visit, the Congressmen heard from Rensselaer faculty members representing crucial areas of multidisciplinary research that are of fundamental significance to energy efficiency, renewable technologies, and the understanding of global environmental change to preserve the biodiversity of the planet:

Dr. Shirley Ann Jackson, the President of Rensselaer, announced the launch of EBESS at President Joe Biden’s Leader’s Summit on Climate in April.

“Our Capital Region scientists and researchers are among America’s most talented pioneers in scientific discovery,” Tonko said. “As leading experts and innovators, they play a key role in developing the technologies to guide our nation toward a clean energy future. I am eager to take the powerful insights and expertise of our researchers at Rensselaer back to Washington to develop legislation that will build a stronger, more competitive America.”

“Seeing the research here at Rensselaer gives us the opportunity to learn together and talk to each other in order to achieve what’s best for the American people,” McKinley said.

“Research at Rensselaer addresses the most pressing challenges of our time,” said Robert Hull, acting vice president of research. “Informing legislators, policy makers, and other stakeholders is one of the cornerstones of our multidisciplinary approach to changing the world.”

The lawmakers came to Rensselaer as part of the American Congressional Exchange project organized by the Bipartisan Policy Center (BPC).

The Bipartisan Policy Center is a Washington, D.C.-based think tank that offers policy solutions created through informed deliberations by officials, academics, advocates, and business leaders and uses bipartisanship to explore perspectives from both political parties to promote health, security, and opportunity for Americans.

“The Rensselaer visit truly highlights the core of the American Congressional Exchange program,” said John Richter, director of BPC’s Congress Project. “It’s imperative we continue making these connections and bring together both sides of the aisle to understand the challenges our communities face and work in conjunction to craft sound public policy to tackle these hurdles.”