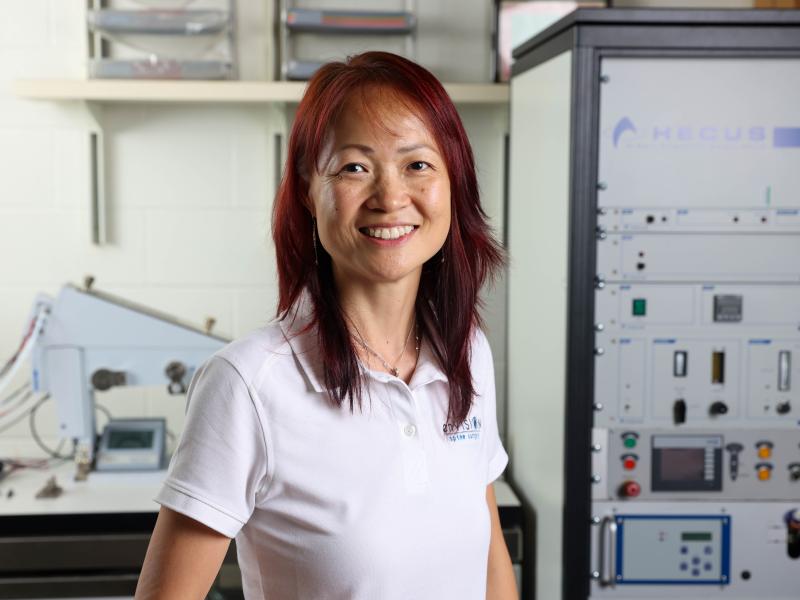 Professor Emily Liu, a condensed matter physicist and nuclear engineer, has been named head of the Department of Industrial and Systems Engineering (ISE) at Rensselaer Polytechnic Institute, the oldest and one of the most renowned technological research universities in the nation. Dr. Liu is professor of nuclear engineering and engineering physics and brings extensive experience leading and managing multidisciplinary research, including collaborations with engineers, scientists, economists, and psychologists.

Industrial and systems engineering is an interdisciplinary science exploring the data analysis and design of systems that involve nature, machines, and the human element. The ISE department at Rensselaer is home to internationally renowned undergraduate and graduate programs, including Industrial and Management Engineering (B.S., M.S., and MEng), Data Science and Engineering (B.S. minor), Industrial and Management Engineering (M.S. and MEng), and Decision Sciences and Engineering Systems (Ph.D.). The department is well known for addressing engineering problems that involve networked, interdependent, socio-technical systems, in which humans play a critical part in decision making.

“I look forward to Dr. Liu’s vision and strong leadership to further advance the department in new and exciting directions,” said Shekhar Garde, dean of Rensselaer’s School of Engineering. “ISE resides at the intersection of complex interconnected systems, data, and human factors. Naturally, it will play a key role in the next technological revolution, and Dr. Liu’s expertise in leading interdisciplinary teams across boundaries will carry the ISE department forward in the areas of data, AI, and computing, with applications to energy, the built and natural environment, and smart systems, as well as to human health and well-being.”

“While I am particularly interested in data science and engineering, socio-technical systems, and sustainability, I believe that a modern ISE department can respond to global challenges in human health and well-being, energy, environment, smart systems, climate change, and security. ISE research is particularly important to supply chains, which have become increasingly important considering COVID-19 and the geopolitics of our time,” she said.

Dr. Liu’s research interests include energy-related economic issues and energy policy, and she has taught Nuclear Phenomena for Engineering Applications, Modeling Analysis and Uncertainty, and Introduction to Engineering Analysis, among other courses, for 15 years at Rensselaer. Collaborating with financial engineers from Rensselaer and Idaho National Laboratory, Dr. Liu has done economic analyses to measure sustainability of advanced hybrid energy systems; she is currently developing new economic models for nuclear fuel cycles.

In 2018, Dr. Liu received an ELATES at Drexel Fellowship, and in 2017, she was awarded an Arab-American Frontiers Fellowship from the National Academies of Sciences, Engineering, and Medicine. She is also the recipient of a Faculty Development Grant from the U.S. Nuclear Regulatory Commission, and numerous teaching and research awards from the School of Engineering at Rensselaer, as well as the Cozzarelli Prize in Engineering and Applied Sciences from the Proceedings of the National Academy of Sciences.

Dr. Liu received her B.Sc. in Technical Physics from Peking University in Beijing in 1999, and her Ph.D. in Nuclear Science and Engineering from Massachusetts Institute of Technology (MIT) in 2005. She was a postdoctoral research associate at MIT with Professor Sow-Hsin Chen. She received the Manson Benedict Fellowship at MIT “for excellence in academic performance and professional promise in nuclear science and engineering.” She joined Rensselaer as a tenure-track assistant professor in 2006, was promoted to associate professor with tenure in 2013, and promoted to professor in 2019.

She has published 62 peer-reviewed journal papers in diverse, respected journals. In addition, she has published 17 peer-reviewed conference proceedings and 34 non-referred conference abstracts. She has presented her research work around the world with 60 invited lectures. Her research has garnered 25 grants to date, enabling approximately $10 million in funding. Dr. Liu received a 2012 School of Engineering Research Excellence Award for a Junior Faculty Member, the School of Engineering Education Innovation Awards (2013 and 2020), as well as the Class of 1951 Outstanding Teaching Award (2013).

Dr. Liu’s leadership is reflected in her service as the president of Rensselaer Faculty Senate, adviser of the ELATES at Drexel Fellowship program, chair of the Diversity, Women's Affairs, and Outreach Committee of the MANE Department, and through many other contributions.