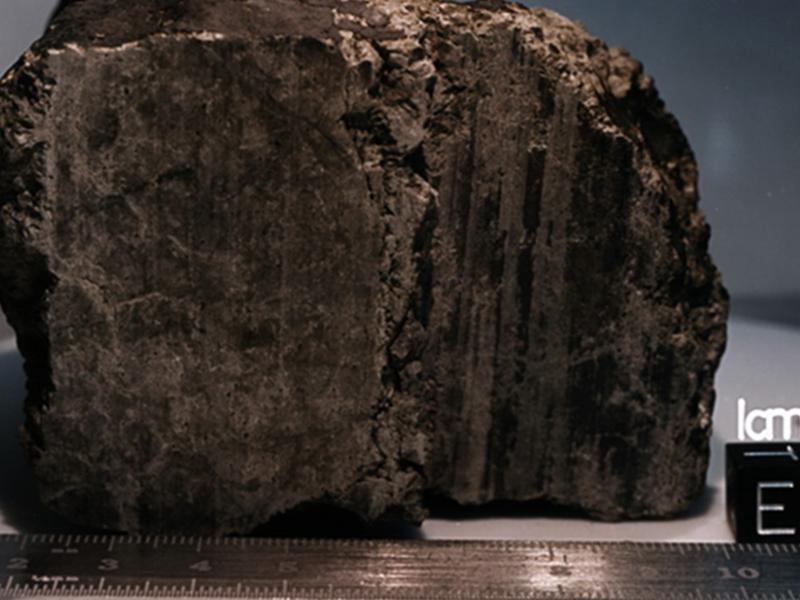 Organic molecules found in a meteorite that hurtled to Earth from Mars were synthesized during interactions between water and rocks that occurred on the Red Planet about 4 billion years ago, according to an analysis to be published this week in Science.

“These results allow us to explore the types of environments — on Mars, early Earth, and potentially on bodies throughout the solar system — that could facilitate the formation of organic molecules necessary for life’s origins,” said Karyn Rogers, a co-author, professor, and director of the Rensselaer Astrobiology Research and Education Center at Rensselaer Polytechnic Institute.

“Rensselaer has a long history of research leadership concerning planetary conditions and chemical mechanisms conducive to the emergence of life on prebiotic Earth” said Curt M. Breneman, dean of the Rensselaer School of Science.  “These new meteorite results address a long-standing mystery about the origin of carbon-based organic compounds on Mars.”

The meteorite, called Allan Hills (ALH) 84001, was discovered in the Antarctic in 1984 and is considered one of the oldest known projectiles to reach Earth from Mars. For years, scientists have debated the origin story for the organic carbon found in the Allan Hills 84001 meteorite, with possibilities including various abiotic processes related to volcanic activity, impact events on Mars, or hydrological exposure, as well as potentially the remnants of ancient life forms on Mars or contamination from its crash landing on Earth.

“Analyzing the origin of the meteorite’s minerals can serve as a window to reveal both the geochemical processes occurring early in Earth’s history and Mars’ potential for habitability,” said Andrew Steele, an astrobiologist at the Carnegie Institution for Science, which led the research team. Dr. Steele has done extensive research on organic material in Martian meteorites and is a member of both the Perseverance and Curiosity rovers’ science teams.

Organic molecules contain carbon and hydrogen, and sometimes include oxygen, nitrogen, sulfur, and other elements. Organic compounds are commonly associated with life, although they can be created by non-biological processes as well, which are referred to as abiotic organic chemistry.

At Rensselaer, Dr. Rogers helped to interpret the mineral alteration data within the context of realistic geologic environments, and will apply this work to explore the potential for similar mechanisms on early Earth in search of life’s early chemistry.

They found evidence of water-rock interactions similar to those that happen on Earth. The samples indicate that the Martian rocks experienced two important geochemical processes. One, called serpentinization, occurs when iron- or magnesium-rich igneous rocks chemically interact with circulating water, changing their mineralogy and producing hydrogen in the process. The other, called carbonization, involves interaction between rocks and slightly acidic water containing dissolved carbon dioxide and results in the formation of carbonate minerals.

It is unclear whether these processes were induced by surrounding aqueous conditions simultaneously or subsequently, but the evidence indicates that the interactions between water and rocks did not occur over a prolonged period. What is evident, however, is that the reactions produced organic material from the reduction of carbon dioxide.

These mineralogical features are rare in Martian meteorites, and while carbonation and serpentinization have been shown in orbital surveys of Mars and carbonation has been found in other, less-ancient Martian meteorites, this is the first instance of these processes occurring in samples from ancient Mars. Organic molecules have been detected by Dr. Steele in other Martian meteorites and from his work with the Sample Analysis Mars team on the Curiosity rover, indicating that abiotic synthesis of organic molecules has been a part of Martian geochemistry for much of the planet’s history.

“These kinds of non-biological, geological reactions are responsible for a pool of organic carbon compounds from which life could have evolved and represent a background signal that must be taken into consideration when searching for evidence of past life on Mars,” Dr. Steele said. “Furthermore, if these reactions happened on ancient Mars, they must have happened on ancient Earth, and could possibly explain the results from Saturn’s moon Enceladus as well. All that is required for this type of organic synthesis is for a brine that contains dissolved carbon dioxide to percolate through igneous rocks. The search for life on Mars is not just an attempt to answer the question ‘are we alone?’ It also relates to early Earth environments and addresses the question of ‘where did we come from?’”

will appear online January 14 and was funded by NASA, Carnegie’s Earth and Planets Laboratory, and the Helmholtz Recruiting Initiative program.

The U.S. Antarctic meteorite samples were recovered by the Antarctic Search for Meteorites (ANSMET) program, which has been funded by NSF and NASA and characterized and curated by the Department of Mineral Sciences of the Smithsonian Institution and the Astromaterials Acquisition and Curation Office at NASA Johnson Space Center, respectively.