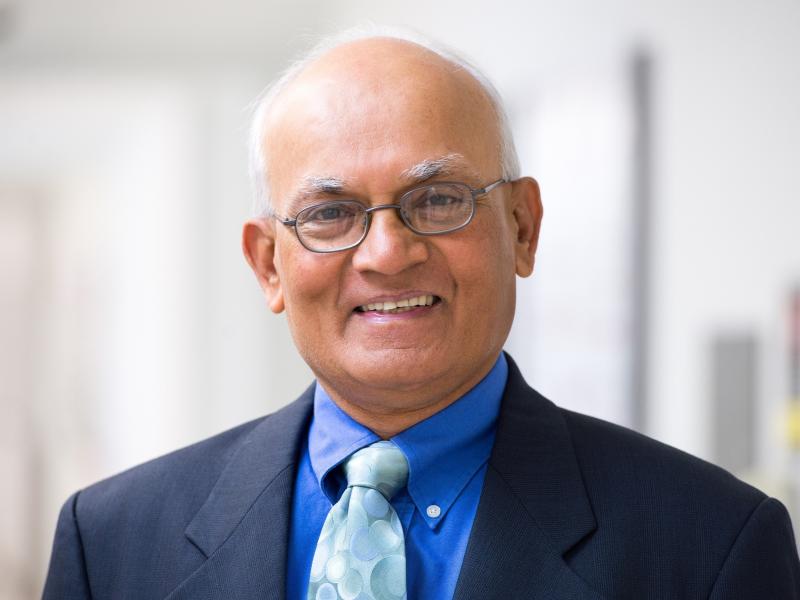 Manoj R. Shah, former Professor of Practice at Rensselaer Polytechnic Institute, has been elected to the National Academy of Engineering (NAE) for his “technical advancements in design, analysis, and applications of electric machines.” As a Professor of Practice in Electrical, Computer, and Systems Engineering (ECSE) at Rensselaer, Dr. Shah taught courses in electric power engineering bringing theory and practice together. Dr. Shah continues his engagement with the ECSE department at Rensselaer as a Senior Research Scientist. He is also engaged with General Electric, where he had a distinguished career.

Election to the NAE is among the highest professional honors bestowed upon an engineer. According to the Academy, membership recognizes those who have made outstanding contributions to “engineering research, practice, or education, including, where appropriate, significant contributions to the engineering literature” and to “the pioneering of new and developing fields of technology, making major advancements in traditional fields of engineering or developing/implementing innovative approaches to engineering education.”

Dr. Shah is an internationally recognized expert in the area of advanced design and analysis of electrical machines. He has co-authored 88 U.S. patents, 21 Institute of Electrical and Electronics Engineers (IEEE) journal papers, and over 25 conference papers. Dr. Shah’s research on topological and performance improvements in electric machines, novel electromagnetic devices/sensors, measurement and analysis techniques, and novel system configurations for subsea and aviation platforms has led to groundbreaking developments and discoveries with impact across the globe.

This includes the early application of computation using finite element analysis, referred to as the “2.5D” method, in electromagnetic design of electrical apparatus, which has now become standard. Dr. Shah’s work in the ’80s first laid the foundation at GE-Power, and then permeated other institutions. This work not only helped with extraction of machine parameters and prediction of machine performance, but also enabled improved, robust, and cost-effective designs. The “2.5D” method led to improved design, power density, and thermal management in many generations of GE turbine generators. Some of the Permanent Magnet machine design concepts have been manufactured into products for electric vehicles, geothermal/oil & gas extraction technologies, aviation hybrid propulsion prototype development, and the RACER tool in GE-Power’s service offering. Electrical Multiphase Imbalance Separation Technique or eMIST is employed to monitor the health of GE wind turbine systems, thus making these systems operate more efficiently and reliably to prevent catastrophic failures.

“Dr. Shah has been recognized as an innovator in the area of advanced design and the analysis of electric machines,” said Rensselaer Provost Prabhat Hajela. “His contributions to improving electric power systems and setting the bar for industry standards has had a global impact. Our Rensselaer community is proud of this fitting recognition of his contributions to the field. It truly embodies the spirit of innovation that the university advances in research and pedagogy.”

“We are thrilled with Dr. Shah’s election to the NAE,” said Shekhar Garde, Dean of the School of Engineering at Rensselaer. “He is not only an outstanding scientist and engineer, but a fantastic teacher and mentor. As a Professor of Practice, Manoj brought immense real-world experience and wealth of knowledge of electric power systems to the classroom and helped our students bridge the gap between theory and practice, and we look forward to his continued engagement with Rensselaer.”

Institute Professor and world-renowned expert in power grid control systems Dr. Joe Chow, who was elected to the NAE in 2017, envisions major opportunities for Dr. Shah’s research in future power systems. “Dr. Shah’s world-class research and design methods in electromagnetics are of paramount importance to future power systems which include large shares of renewable resources and future transportation systems, such as electric vehicles and electric aircrafts,” he said.

“Putting theoretical ideas to work in important practical applications has been a passion of mine throughout my career at GE,” said Dr. Shah. “Being a teacher and mentor at Rensselaer presented a special opportunity for me to share my ideas with bright young minds and collaborate with outstanding faculty in the department. I look forward to my continued engagement with the next generation of students and faculty.”

Dr. Shah is an elected fellow of the Institute of Electrical and Electronic Engineers (IEEE), a member of the Technical Advisory Board for the Future Electric Machine Manufacturing (FEMM) Hub at the University of Sheffield, United Kingdom, and a Short Course Instructor on Electric Machines at the SAE-Hybrid Vehicle Academy.

The newly elected class of NAE members will be formally inducted during a ceremony at the NAE’s annual meeting on Oct. 2, 2022.