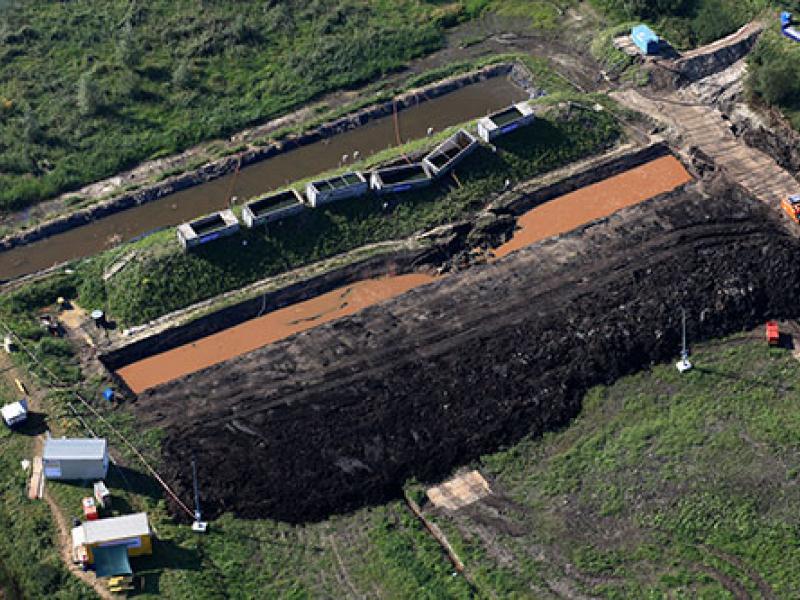 Space travel is heating up—and so are rocket fuel emissions. These companies are developing cleaner alternatives to protect earth first
Why Do Fossil Fuels Have So Much Carbon Stored in Them?
Rensselaer Creates Course Program Focused on Training in Micro and Nanofabrication Cleanroom Technology
Rensselaer Researcher Awarded NASA Space Biology Grant for Work Focused on Spaceflight Stressors
Moveable Robotic Platform Could Be the Future of Retail
September 19, 2012

Civil engineers from Rensselaer Polytechnic Institute were part of an international research team that collapsed a full-scale dike this week in The Netherlands. The test dike was embedded with advanced sensors and traditional measurement instruments, and results of the study are expected to help validate powerful new technologies for monitoring the health of aging flood-control infrastructure.

The dike was situated in a specially constructed basin, which the researchers filled with water. The slow addition of water into the basin increased the pressure on the dike. Water forced its way into the dike, and eventually softened the bottom of the dike and shifted the earth underneath, prompting the overall structure to collapse. The study was led by Dutch research institute Deltares, in partnership with Rensselaer and 14 other companies and universities from around the world. It was the research team’s third full-scale levee test collapse this summer. The full results of the tests will be presented at the Flood Risk Conference in November 2012 in Rotterdam, The Netherlands.

“The failure of flood-control infrastructure is very real, and can lead to catastrophic flooding as we unfortunately witnessed in 2005 during Hurricane Katrina,” said Tarek Abdoun, associate dean for research and graduate programs in the School of Engineering and the Judith and Thomas Iovino ’73 Career Development Professor in the Department of Civil and Environmental Engineering at Rensselaer. “A large-scale test like this can help supply us with invaluable data to inform and validate our efforts to create a long-term, real-time monitoring system that can assess the health of levees and help identify the vulnerability of levee or dam sections before they fail.”

Rensselaer Research Assistant Professor Victoria Gene Bennett and Associate Professor Mourad Zeghal are collaborating on the project with Abdoun. Their participation in the Deltares project was funded as part of a three-year grant from the U.S. Department of Homeland Security’s Science and Technology Directorate. Abdoun, Bennett, and Zeghal are faculty members of the Rensselaer Center for Earthquake Engineering Simulation (CEES), which is a part of the George E. Brown, Jr. Network for Earthquake Engineering Simulation (NEES) Program of the National Science Foundation.

The collapsed dike was fit with a large number of different sensors, including SAPP (shape-acceleration-pore pressure) arrays that were developed through a partnership between Rensselaer and industrial collaborator Measurand. SAPP sensor arrays are designed to be installed into the ground, beneath and around levees and dams. The cost-effective arrays accurately measure soil deformation, vibration, and pore pressure at critical points of a flood-control system.

These SAPP arrays are a critical part of an ongoing Rensselaer-led research project to create an integrated suite of technologies and methods for ensuring the reliability and safety of flood-control infrastructure. The project, funded by the U.S. National Institute of Standards and Technology’s Technology Innovation Program, pairs SAPP measurements with GPS and InSAR, or satellite-based interferometric synthetic aperture radar measurements. Accurate down to the millimeter, InSAR captures and analyzes high-resolution satellite images of levees and dams, and measures how far these structures have shifted or sunk due to environmental changes such as rain, floods, tremors, or even aging. To bridge the gap between InSAR satellite data and below-ground SAPP measurements, the researchers will augment the framework with a network of high-resolution GPS sensors to track the physical movement of structures and the ground surface.

“Through our joint venture partnership with Geocomp Corp., a dense grid of instruments including SAPPs, GPS, and radar reflectors has been installed at the London Ave. Canal in New Orleans. The real-time data collected from this site, and others in the New Orleans area, will make performance information available during this and upcoming hurricane seasons, in addition to providing calibration data for health assessment algorithms,” Bennett said. Led by Zeghal, this project is a collaboration with Bennett, Abdoun, and Birsen Yazici, professor in the Department of Electrical, Computer, and Systems Engineering and the Department of Biomedical Engineering at Rensselaer.

Data collected from the SAPP, InSAR, and GPS systems are integrated into an automated “smart network” that provides a long-term continuous assessment of the health of levee systems from both underground and aerial perspectives. In the case of a levee failure, data collected by the automated monitoring system will be used to organize a quick emergency response to repair levees and minimize the extent of flooding. Collected data is also being paired with computational simulation techniques to build accurate, predictive models of how different levees will react to different environmental conditions. These models help inform plans to mitigate levee damage and respond to disasters, and provide quantitative assessments that will better allow federal and local governments to prioritize where infrastructure repairs are most needed.

In the United States, the national flood-control infrastructure is aging and its structural health is deteriorating, Abdoun said. The system is comprised of more than 5,600 km of levees, and 43 percent of the U.S. population lives in counties with levees designed to provide some level of protection from flooding. Some of these levees are as old as 150 years. In 2009, the American Society of Civil Engineers Report Card for America’s Infrastructure gave the condition of the nation’s dams a grade of D, and levees a grade of D-minus.

For more information on Abdoun’s research at Rensselaer, visit: