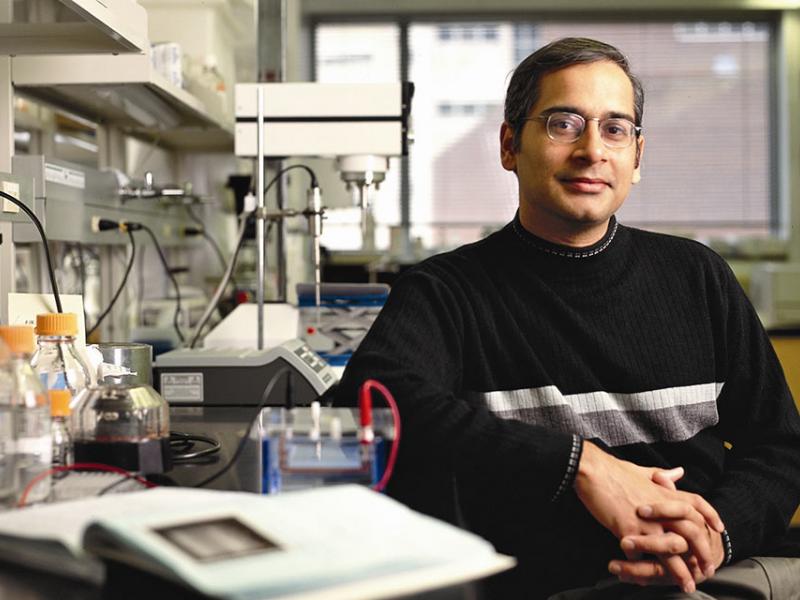 Ravi Kane, the P.K. Lashmet Professor in the Howard P. Isermann Department of Chemical and Biological Engineering and faculty member of the Center for Biotechnology and Interdisciplinary Studies at Rensselaer.

A new study from engineers at Rensselaer Polytechnic Institute and the University of California, Berkeley, pairs light and genetics to give researchers a powerful new tool for manipulating cells. Results of the study, published in the journal Nature Methods, show how blue light can be used as a switch to prompt targeted proteins to accumulate into large clusters.

This process of clustering, or oligomerization, is commonly employed by nature to turn on or turn off specific signaling pathways used in cells’ complex system of communications.

The new study details how this process can be replicated with great precision, giving researchers new capabilities to control and influence the process of oligomerization and cell signaling.

“Our study shows a new use for using energy, in this case light, as a tool to understand and control cellular function. In this study, we demonstrated a new method for turning specific cell signaling pathways on and off with spatial and temporal precision, and use this to help better understand the dynamics of the pathway. At the same time, our technique can be used to control certain cell functions,” Kane and Schaffer said.

Looking ahead, Kane said, it is possible the new process may also one day be able to help optimize cellular function and produce products of interest to energy production, such as biofuels.

Results of the study, titled “Optogenetic protein clustering and signaling activation in mammalian cells,” were published online last week by Nature Methods and will appear in a future print edition of the journal. The study may be viewed online at: http://go.nature.com/jPqpHa

Light is an attractive tool to manipulate oligomerization, Kane said, because of three properties: most biological cells do not normally react or respond to light; light is easy to make; and researchers can easily control light properties including its color and intensity. In this new study, the research team shined blue light onto cells containing a bioengineered protein, and by doing so they were able to activate cell signaling more effectively than they could using the natural ligand Wnt3a. This protein clustering induced by shining light was reversible—upon removing the blue light, the cluster broke up within a few minutes. The researchers also demonstrated how to use this modular technique to cluster proteins that control cell shape.

“The new process can be applied to many different types of proteins, signaling pathways, and cells,” said study co-author Lukasz Bugaj, graduate student at UC Berkeley. The research team plans to continue investigating new ways of controlling different aspects of cells and cellular function with light.

Along with Kane, Schaffer, and Bugaj, co-authors of the paper are UC Berkeley graduate student Colin Mesuda and research assistant Atri Choksi.

For more information on Kane and his research at Rensselaer, visit: