Fighting Listeria and Other Food-Borne Illnesses With Nanobiotechnology 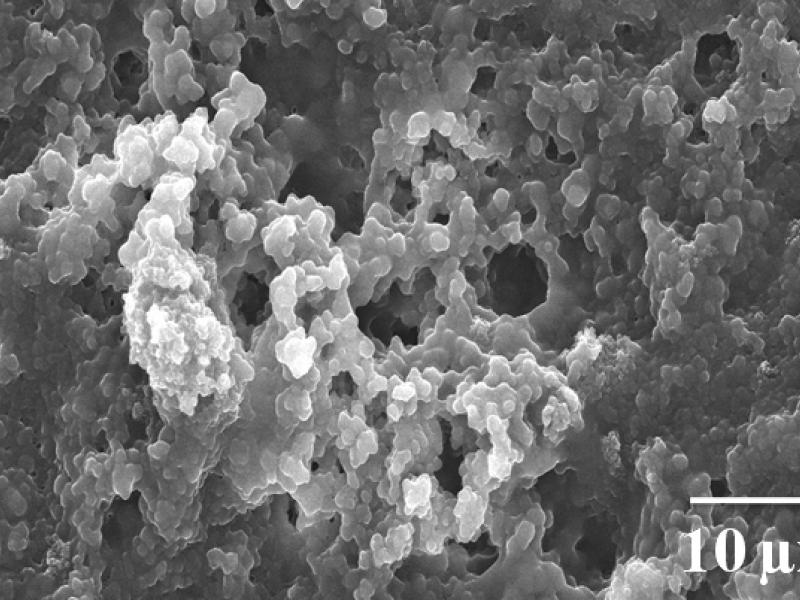 Fighting Listeria and Other Food-Borne Illnesses With Nanobiotechnology

Engineering researchers at Rensselaer Polytechnic Institute have developed a new method to kill deadly pathogenic bacteria, including listeria, in food handling and packaging. This innovation represents an alternative to the use of antibiotics or chemical decontamination in food supply systems.

Using nature as their inspiration, the researchers successfully attached cell lytic enzymes to food-safe silica nanoparticles, and created a coating with the demonstrated ability to selectively kill listeria—a dangerous foodborne bacteria that causes an estimated 500 deaths every year in the United States. The coating kills listeria on contact, even at high concentrations, within a few minutes without affecting other bacteria. The lytic enzymes can also be attached to starch nanoparticles commonly used in food packaging.

This new method is modular, and by using different lytic enzymes, could be engineered to create surfaces that selectively target other deadly bacteria such as anthrax, said Jonathan Dordick, vice president for research and the Howard P. Isermann Professor at Rensselaer, who helped lead the study.

This research, which combined the expertise of chemical engineers and material scientists, took place in the Rensselaer Center for Biotechnology and Interdisciplinary Studies and the Rensselaer Nanoscale Science and Engineering Center for the Directed Assembly of Nanostructures. Collaborating with Dordick were Rensselaer colleagues Ravi Kane, the P.K. Lashmet Professor of Chemical and Biological Engineering, and Linda Schadler, the Russell Sage Professor and associate dean for academic affairs for the Rensselaer School of Engineering.

“In this study, we have identified a new strategy for selectively killing specific types of bacteria. Stable enzyme-based coatings or sprays could be used in food supply infrastructure—from picking equipment to packaging to preparation—to kill listeria before anyone has a chance to get sick from it,” Kane said. “What’s most exciting is that we can adapt this technology for all different kinds of harmful or deadly bacteria.”

Results of the study are detailed in the paper “Enzyme-based Listericidal Nanocomposites,” published today in the journal Scientific Reports from the Nature Publishing Group. See the paper online at: http://dx.doi.org/10.1038/srep01584

This most recent study builds upon the research team’s success in 2010 of creating a coating for killing methicillin resistant Staphylococcus aureus (MRSA), the bacteria responsible for antibiotic resistant infections. While the previous coating was intended for use on surgical equipment and hospital walls, the development of a listeria-killing coating had the extra challenge of needing to be food-safe.

Dordick and the research team found their answer in lytic enzymes. Viruses that affect bacteria, called phages, inject their genetic material into healthy cells. The phage takes over a healthy cell, and in effect transforms the host cell into a little factory that creates more phages. Near the end of its life cycle, the original phage creates and releases lytic enzymes, which break down and make holes in cell walls of the infected bacteria. The manufactured phages escape through these holes and go on to infect other healthy cells.

To stabilize the listeria-killing lytic enzymes, called Ply500, the researchers attached them to U.S. Food and Drug Administration-approved silica nanoparticles to create an ultra-thin film. The researchers also used maltose binding protein to attach Ply500 to edible starch nanoparticles commonly used in food packaging. Both Ply500 formulations were effective in killing within 24 hours all listeria at concentrations as high as 100,000 bacteria per milliliter—a significantly higher concentration than normally found in food contamination situations.

“Starch is an inexpensive, edible material often sprayed into the packaging as a powder layer on meat product. We took advantage of the natural affinity of a maltose binding protein fused to Ply500, and biologically bound Ply500 to starch as a non-antibiotic, non-chemical agent for reducing the threat of listeria to our food supply,” Schadler said.

This research was supported with funding from Sealed Air Corporation.

For more information on the work of this research, team, visit: