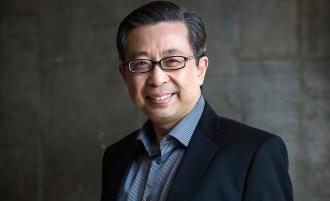 X. George Xu, the Edward E. Hood Endowed Chair Professor of mechanical, aerospace, and nuclear engineering, has been chosen to receive the 2020 Arthur Holly Compton Award in Education from the American Nuclear Society. This honor was established in memory of Arthur Holly Compton, a physicist and Nobel Prize winner in physics, to recognize “outstanding contributions to education in nuclear science and engineering.”

Xu is an internationally recognized expert on radiation dosimetry and safety. His research has wide applications ranging from radiation shielding design for nuclear facilities to medical software tools that improve imaging and radiation therapy of cancer patients.

He has been on the faculty at Rensselaer since 1995 and has made a significant impact on students he has interacted with both inside and outside of the classroom. Many of his former Ph.D. students are now faculty members at leading universities and medical centers nationwide. Xu also holds an appointment in the Department of Biomedical Engineering.

“Professor Xu has deeply influenced the education and career of a generation of nuclear engineers and health/medical physicists. His dedication to both classroom instruction and mentoring is truly exceptional, and is a significant portion of his legacy,” said Suvranu De, head of the Department of Mechanical, Aerospace, and Nuclear Engineering.

Earlier this year, Xu was selected by the American Association of Physicists in Medicine (AAPM) to receive the Edith H. Quimby Award for Lifetime Achievement in Medical Physics. Xu also received the Distinguished Scientific Achievement Award from the Health Physics Society in 2018, and the Randall S. Caswell Award for Distinguished Achievements in Ionizing Radiation Measurements and Standards in 2015.