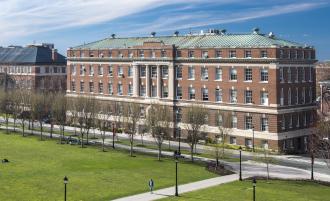 Engineered polymers that are used in energy production, to recycle energy, or to make energy more efficient, are often degraded by flow processes that break chemical bonds along the polymer chain.

To counteract this degradation, and the compromised performance that comes with it, engineers have designed branched or star-like polymer shapes that are less susceptible to shear than straight polymer chains.

Until now, researchers have relied on observed data to understand the impacts of geometry on polymer performance. With the support of a new grant from the Department of Energy (DOE), Patrick Underhill, a professor of chemical and biological engineering, will expand this understanding through the use of models and simulations.

“In the simulations, we calculate the tension forces in the different parts of the molecule,” Underhill said. “The hypothesis is that the different arms, if we have a star-shaped polymer for instance, distribute the tension better than if it’s just a straight polymer.”

This work will help researchers understand at a molecular level how topology, or the study of geometric properties, effects polymer deformation at high shear rates and how that causes chemical bonds to break within the polymer.

What researchers learn will help the design of future polymers that are more mechanically stable or, if an application calls for it, polymers that can be easily broken down.

“If you know how to control that tension,” said Underhill, who is also a member of the Center for Biotechnology and Interdisciplinary Studies at Rensselaer, “then it can be used for something other than just mechanical applications such as modulating chemical reactivity of some systems.”

Underhill is working with Matthew Helgeson, an associate professor of chemical engineering at the University of California Santa Barbara, on this research. He and Helgeson forged a research collaboration during Underhill’s sabbatical in Helgeson’s lab three years ago.

Helgeson and his team have developed a method for engineering consistent molecules with different geometries. They’ve also created a device, Underhill said, that will allow the team to collect critical data needed for Underhill’s simulations.

“They’ve created a device where they can apply these strong flows and shoot neutrons through it at the same time to see how those polymers are distorted and deformed by that flow,” Underhill said. “After validating the simulations using the measurements of deformation, I think they could really help to understand the mechanism of those forces and the breakage better.”