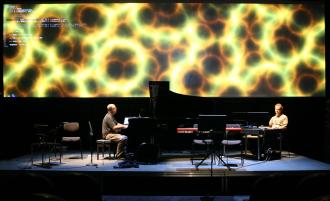 Michael Century, professor in the Department of Arts at Rensselaer Polytechnic Institute, will present a full-length concert of visual music at the Ciminelli Recital Hall at Buffalo State University on October 21.

Century, a pianist and composer, will offer interpretations of eight selections of music featuring his own work, as well keyboard pieces by J.S. Bach, Philip Glass, and Steve Reich, in a program that combines live-coding of computer graphics with musical performances.

Performing as the duo Liveware, Century will be joined on stage by Shawn Lawson, a former Rensselaer professor who will be generating the images by writing source code in real time. While live coding is a common practice in the performing arts, Lawson’s improvisational visual coding practice also extends into novel uses of machine learning as an emerging medium of creative expression.

Liveware specializes in a unique version of visual music in which the correspondences between images and sounds are generated on-the-fly, with various degrees of control delegated to software systems responding to performers’ expressive gestures.

The concert will be performed in person following all public health protocols. Beginning at 7:30 p.m., it will also be live streamed on YouTube and available for viewing after the concert is complete.

Century’s musical creations for this concert include a new version of  “The Isle is Full of Noises,” a generative soundscape based on Shakespeare’s The Tempest that was initially workshopped using Wave Field Synthesis arrays at EMPAC. He will also perform two premieres, “Latent Cartographies” and “Small Infinities,” which employ the Expanded Instrument System designed by Pauline Oliveros and used with special permission of the Pauline Oliveros Trust and the Ministry of Maat.

Oliveros, who died in 2016, is a central figure in the development of electronic music and was a distinguished research professor of music at Rensselaer, where she established the Center for Deep Listening.