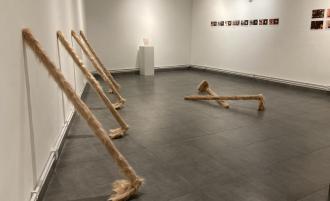 Jefferson (Zé) Kielwagen, a lecturer in the Department of Arts at Rensselaer Polytechnic Institute, recently opened a solo art show at the Edi Balod Gallery in Criciúma, Brazil.

The gallery is part of the University of the Extreme South of Santa Catarina (UNESC). The show features works of sculpture, intervention, and performance, including two new works, one of which is a sound installation created in collaboration with Rensselaer Earts Ph.D. candidate Lisa Schonberg.

As part of the opening, Kielwagen delivered a talk and held a Q&A session with UNESC´s students and faculty in their Visual Arts program.

Kielwagen also recently released a book of poems and short stories in Brazil. “Império da feiura e outros textos” (“Empire of Ugliness and Other Texts”), the book was edited and published by Micronotas, a publishing company specialized in literature. The book launch took place at the University of Joinville, UNIVILLE, in Joinville/Brazil.

In August, he will spend 10 days in and around Belém, Brazil shooting his next film. The as-yet-untitled project is a comedy horror film set in the Amazon Forest. This will be the fourth film for Kielwagen. Previous works include The Frightened President and Masisi Wouj, both released in 2020, and Gede Vizyion, from 2018.