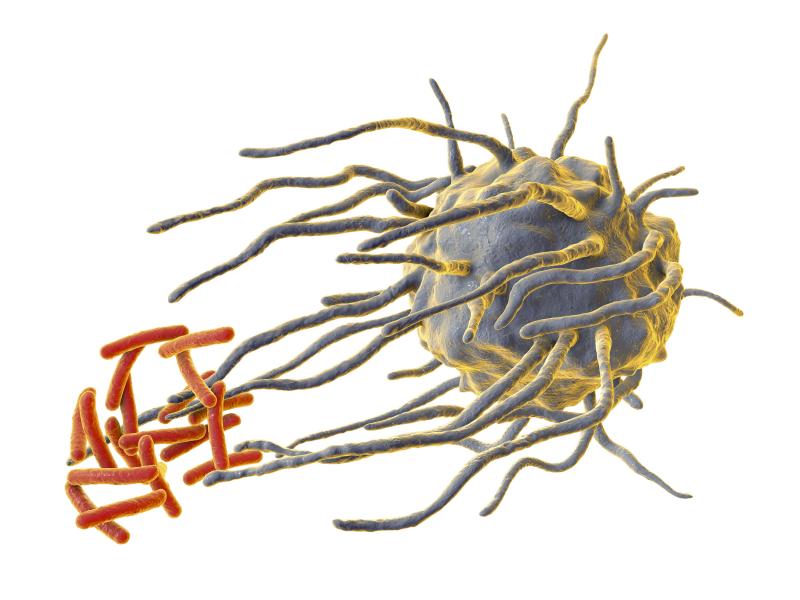 Daily rhythms may impact our ability to fight disease

An analysis of an exhaustive dataset on cells essential to the mammalian immune system shows that our ability to fight disease may rely more heavily on daily circadian cycles than previously assumed.

Malfunctions in circadian rhythms, the process that keeps our bodies in tune with the day/night cycles, are increasingly associated with diabetes, cancer, Alzheimer’s, and many other diseases. An investigation published today in Genome Research shows that the activity of macrophages — cells within us that seek and destroy intruders like bacteria — may time daily changes in their responses to pathogens and stress through the circadian control of metabolism.

In this study, Jennifer Hurley, the Richard Baruch M.D. Career Development Assistant Professor of Biological Sciences at Rensselaer Polytechnic Institute and senior author on this study, and her team investigated how the levels of RNA and proteins in macrophages change over two days.

“We have shown there is an incredible amount of circadian timing of macrophage behavior, but the clock is timing macrophages in unexpected ways” said Hurley, a member of the Center for Biotechnology and Interdisciplinary Studies (CBIS) at Rensselaer.

Positive element proteins also regulate fluctuations in a substantial number of gene products, known as messenger RNA or mRNA. Genetic instructions are transcribed from DNA to mRNA, which are then used as a recipe for assembling proteins, the functional building blocks of the cell. It has long been assumed that the levels of each subsequent step could be predicted from the previous. If that were the case, oscillating mRNA would correspond with oscillating levels of cellular proteins, and therefore, if one could track mRNA, they would know what proteins the circadian clock controlled in the cell.

However, this investigation showed that this paradigm may not always be true. The analysis of the macrophage dataset revealed that there was a substantial mismatch between the proteins and mRNAs that are controlled by the circadian clock. This data paralleled research published in Cell Systems in 2018 by the Hurley lab, showing that about 40% of oscillating proteins in the fungus and circadian model system, Neurospora crassa, had no corresponding oscillating mRNA.

“But the scale of the difference in macrophages really surprised us,” Hurley said. “Eighty percent of the proteins that oscillate don’t have associated oscillating mRNA in macrophages. That means we were really missing how the clock was timing immunity.”

Hurley’s team, in collaboration with the lab of Annie Curtis at the Royal College of Surgeons in Ireland (RCSI), was able to predict and then demonstrate that the clock regulated metabolism to time key immune functions in macrophages. To do so, researchers from RCSI tracked the energy-generating mitochondria of macrophages, showing the rhythm with which the organelles split apart to generate energy and re-unite in a resting stage. Then the Hurley lab was able to show that the timing of key immune processes was controlled by the changes in energy production that resulted from the splitting and fusing of the mitochondria.

“Our data points to the need to track rhythms on a whole new level,” Curtis, senior lecturer at RCSI, said. “It also means that our bodies are timed by our circadian clocks more than we thought.” This circadian timing of the immune system has implications for human health, disease treatment, and vaccine efficacy.

“Post transcriptional Circadian regulation in Macrophages Organizes Temporally Distinct Immunometabolic States” was published with support from the National Institutes of Health, the Department of Energy, the Consejo Nacional de Ciencia y Tecnología, and the Science Foundation Ireland. At Rensselaer, Hurley was joined in the research by Emily J. Collins. Annie M. Curtis led the research at the Royal College of Surgeons in Ireland and was joined there by Mariana P. Cervantes-Silva, George A. Timmons, and James R. O’Siorain.