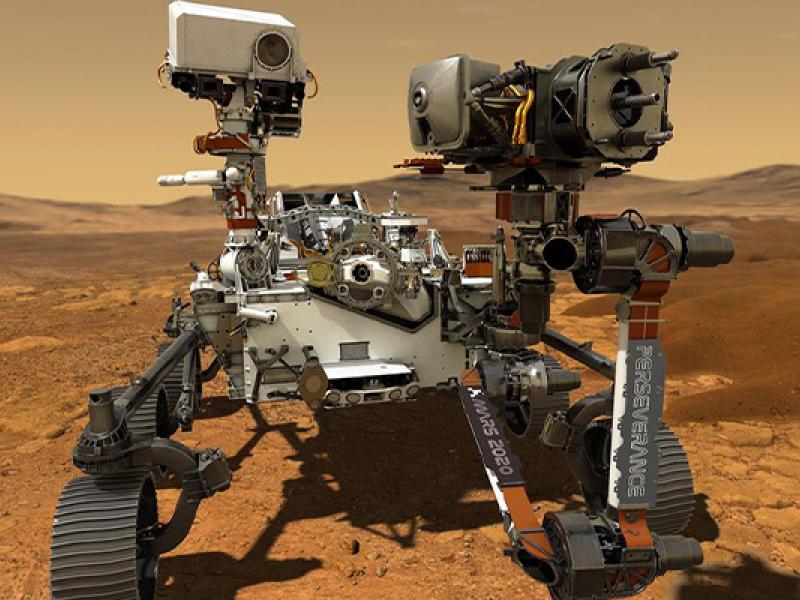 Mars experts and researchers from the Rensselaer Astrobiology and Research Education (RARE) Center will host a virtual watch party of the NASA Mars 2020 Perseverance rover landing. The livestream event, which is free and open to the public, will begin at 2:30 p.m. EST on February 18. In addition to streaming NASA TV coverage of the landing, leading scholars will discuss science related to Mars — and this mission in particular — and answer audience questions.

“The Perseverance rover is going to help us understand if Mars could have ever hosted life, and we hope the community will join us for a more personal connection with the science and the mission in general,” said Karyn Rogers, director of the RARE Center and an associate professor of earth and environmental sciences at Rensselaer Polytechnic Institute.

To RSVP, join the watch party, or send a question to the panel, visit the landing party webpage.

NASA’s Mars 2020 Perseverance rover is the most sophisticated machine ever sent to the red planet. The rover is ferrying several cutting-edge technologies, including a helicopter named Ingenuity, which will be the first aircraft to attempt powered, controlled flight on another planet. According to NASA, the Perseverance rover is designed to better understand the geology of Mars and seek signs of ancient life. The mission will collect and store a set of rock and soil samples that could be returned to Earth in the future, and test new technology to benefit future robotic and human exploration of Mars.

“We’ll have experts on Mars and astrobiology to answer questions and talk about their own science, the landing site for the rover, the instruments on board, and what we hope to learn from this mission, and we’re going to pop in and out of NASA TV as the landing approaches,” Rogers said of the watch party.

During the livestream, Rogers and other RARE Center faculty members — including data scientist Peter Fox, mass spectrometry expert Jake Shelley, and paleoclimatologist Morgan Schaller — will participate in a panel discussion with astrobiologists Andrew Steele, a member of the NASA Sample Analysis at Mars team from the Carnegie Institution for Science; Brian Hynek, a Mars planetary scientist from the University of Colorado Boulder; and S. Mike Angel, an expert in optical spectroscopy for planetary exploration from the University of South Carolina.

Rensselaer has a long and storied history of participation in space exploration. Rensselaer alumnus George M. Low ’48, who later became the 14th president of the university, managed the Apollo program after the Apollo1 disaster and shepherded it through recovery to the triumph of the first Lunar landing on July 20, 1969. Among the many Rensselaer graduates who have worked at NASA, Rensselaer has produced three astronauts, as well as dozens of alumni involved in NASA missions on Mars.

At the watch party, Rensselaer alumnus Kobie Boykins ’96, a senior mechanical engineer at NASA Jet Propulsion Lab, will share a special message. Boykins designed the solar array systems for the Mars rovers Spirit and Opportunity and designed actuators on the Mars Curiosity rover.

Rensselaer faculty are currently involved in a number of space-based research projects, in areas such as spacecraft navigation, mapping the galactic halo and disk, and space debris removal.

The RARE Center seeks to discover the conditions that led to the emergence of life on Earth as a means to understand where similar processes may have occurred elsewhere in the universe. The center is supported, in part, through a $9 million grant from NASA.

“For several decades, Rensselaer faculty have been deeply engaged in research designed to probe the fundamental requirements that enable life to exist on Earth — and potentially elsewhere,” said Curt Breneman, dean of the Rensselaer School of Science. “Through the efforts of the RARE Center faculty and students, we will learn more about life’s essential signatures, and what to look for in extraterrestrial environments. We will be looking for life that can exist, or did exist, in extreme environments.”

Rogers’s own work focuses on the relationship between early Earth conditions, prebiotic chemistry, and the potential for habitability by extreme microorganisms.  She said that by searching for biosignatures of ancient life on Mars, the Perseverance mission offers the chance to raise the “sample size” of habitable planets from one to two. If the rover finds organic compounds, she said, researchers can work backward to determine the environment where those compounds formed, gaining a “valuable data point about where the chemistry of life could have started.”

“If we can show that there was life on another planet, it really changes the entire game for astrobiology in general, habitability in the solar system and beyond the solar system,” Rogers said. “For those of us in the RARE Center, in particular, it can guide our thinking about the types of environments where we might need to look for prebiotic chemistry.”