A Prehistoric Understanding of Wildfires To Improve Forecasting

A Prehistoric Understanding of Wildfires To Improve Forecasting 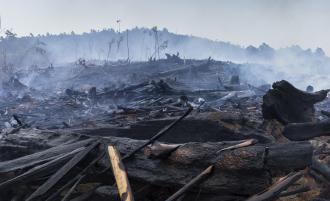 In mid-September, the sky in New York took on a distinctive haze as smoke from the West Coast wildfires officially reached the East Coast. On the East Coast, the tint is a visual reminder that local burn events can have widespread, global impact. The fires themselves are also a source of valuable information for Rensselaer Polytechnic Institute researchers Sasha Wagner and Morgan Schaller.

Wagner and Schaller, both assistant professors of earth and environmental sciences, are ultimately interested in constructing a clearer picture of how Western U.S. wildfire activity evolved throughout the Holocene, a period from about 11,650 years ago to today, and in bringing that historical perspective to modern wildfire regimes. Wagner is an expert in black carbon, a fire-derived subset of the carbon constantly cycled through between the land, water, and atmosphere of Earth. Schaller, a paleoclimates expert, focuses on ancient changes in the concentration of atmospheric carbon dioxide and analogs to modern increases in greenhouse gas concentrations.

The frequency and intensity of present-day West Coast wildfires is increasing — a trend driven by fire suppression and exacerbated by a warming climate. Wildfires release carbon to the atmosphere in the form of carbon dioxide, smoke, and other aerosols. This atmospheric carbon release is somewhat buffered as the fires also produce charcoal, which is relatively inert and cycles more slowly than biomass carbon. This activity means that wildfires are important moderators of contemporary global carbon fluxes and other biogeochemical cycles.

In the Western U.S., charcoal from these massive wildfires is efficiently swept from the steep, mountainous landscape to marine coastal basins, which leaves behind a record of fire activity in marine sediments. These charcoal records provide a baseline for comparison to wildfires exacerbated by modern climate change. In turn, an improved understanding of when and how charcoal is transported from recently burned landscapes to coastal margins will place wildfire ecology and other climatic variations in Earth’s past into a larger context.

Depending on its size and composition, charcoal in marine sediments can provide clues as to how it got there. Wagner and Schaller seek to identify key environmental pathways — for example, whether the charcoal worked its way to the ocean via rivers and streams, or was deposited from the atmosphere — for the transfer of charcoal from the terrestrial landscape to coastal margins by measuring different types of charcoal that accumulates in marine sediments.

Wagner and Schaller look to these marine sediments to reconstruct timelines of wildfire in Earth’s recent and geologic past. Based upon temporal patterns discovered within the marine charcoal record, these data may also be used to predict future fire activity within the region.