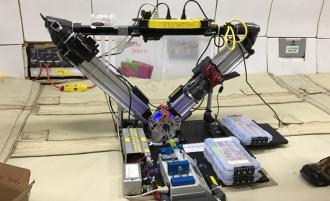 Amir Hirsa, a professor of mechanical, aerospace, and nuclear engineering at Rensselaer Polytechnic Institute, has developed a device that could yield valuable insights about the fluid mechanics at play in diseases like diabetes, Alzheimer’s, and Parkinson’s. Such an understanding could lead to better treatment or prevention strategies for these diseases. The only hitch is that, in order for the device to work, it requires a zero-gravity environment.

That is why Hirsa, who is also a member of the Center for Biotechnology and Interdisciplinary Studies (CBIS), and a team of graduate students recently traveled to Fort Lauderdale, Florida, for a parabolic flight campaign hosted by NASA and ZERO-G Corporation. This comes after Hirsa and his lab first tested his unique method — known as the ring-sheared drop — on the International Space Station (ISS) in 2019.

The ring-sheared drop concept allows the flow and mixing of fluids to be studied without a container. In microgravity, surface tension holds the fluid together instead. This approach, Hirsa said, allows researchers to observe how proteins react to stress without having to also account for interference from the solid walls of a petri dish. The ring-sheared drop apparatus includes a syringe that can dispense an inch-size drop of liquid, one drop at a time. The drop is held together in microgravity and gently kept in place by two metal rings — one of which can be rotated remotely in order to induce stress in the liquid drop.

The experimental flights in Fort Lauderdale allow Rensselaer and NASA researchers to improve the ring-sheared drop technology that Hirsa designed and NASA engineers built, preparing it for subsequent ISS experiments. The flights will also allow Hirsa and Richard Bonocora, a senior lecturer in biological sciences, to study some of the technology’s biopharmaceutical applications.

Hirsa and his lab also recently published new research in Physics of Fluid, where they explored techniques for recreating the effects of zero gravity on a drop of liquid, but on Earth. The researchers found that using silicone oil drops surrounded by an aqueous solution will effectively hold the drop of liquid together, as it does in microgravity, because the density of the two types of liquid matches. From there, the team studied the deformation of the liquid drop when shear stress was applied. Recreating this effect on the ground will help Hirsa’s lab improve experiments in space, while also furthering research on the ground between flights. This publication was also selected as an “Editor’s Pick” by the journal.